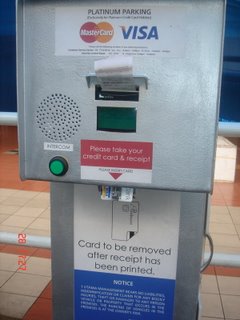 Couldn't give two f*cks to my swollen foot. I went shopping yesterday, after the over-ordered lunch (again) with Eleana at Centrepoint. I was a little disappointed to find that the valet service at One Utama new wing is no more there. The guard then asked me if I've got a platinum card. Yes, I do, so??? What has it gotta do? I then was told that I get to park at this area where only platinum card holders can get in? What the f*ck? What's all these?I parked in there anyway. Well, they have these funky machine before you get in the area where you've to put your card in before they give you a ticket, that was something new to me.

When I met up with my mum, she asked me where I've parked my car, I said 'outside'.
"Where outside?"
"Outside of Delicious"
"Oh, you can park there? I didn't know that"
"Yeah, you don't have to pay too, just use your credit card"(giving the smarty-pants face)
"How much?"
"Not sure, eight bucks I think"
"There are heaps of empty space in the carpark and it's only a dollar!"
"I don't know, I don't know the way, I've just got home, give me some time to get my memory back..."
"blah blah blah blah..."

Before I got to buy what I was suppose to, I made a pit stop at Zara, my weekday playground for affordable fashion fix. In merely fifteen minutes, I managed to grab a tweed long jacket and a jumper, for less than RM600!!! My god, if it wasn't because of my mum was waiting for me, I could have spent two hours in there. Nevermind, next week! And wish they'll have more new stocks.

Not only that, I got some of my cosmetics from Kensapothecary for less than AUD350. You've no idea how cheap they are here than in Melbourne. I don't mind spending on clothes in Melbourne because I get totally different styles and cuts, but these cosmetics are the same shit. Man, I'm gonna stock some Creed parfum back, they are just sensational.

Went for full legs, arms and underarm waxing today. It's been nine months. Wait, I'm not saying that I've not been waxing for nine months but lying down there having a few people around me to wax me, not something that I usually do in Melbourne. It's usually the DIY at home. But here, it's dirt cheap, I can't be bothered doing anything myself. Not to forget the SPA manicure and pedicure that are free (okay, my mummy paid for them). I think I could be really spoilt if I live here (again) long enough.

Your mom is cute... she can tell u the truth with calm voice. Hahahha;)

With years of practice, my mum is now very calm with me. Otherwise she'll get heart attack, I'm sometimes her nightmare.