My sleep pattern is destroyed, or rather, my sleep is destroyed. Time that I managed to finally doze off is mostly during sunrise. It doesn't change even if I've only had 5 hours sleep the night before. Sometimes it can get frustrating but at most nights, I just stared at the ceiling calmly, waiting for my eyelid to get heavier.

These are the times when I think of Dad most. When everyone's in bed and when we would be having unhealthy late night supper in the dining room. Just me and him and no one else. We're the two owls in the family and see late night supper as one of the most important meal of a day. We talked and we laughed. I don't remember what we used to talk about but I know we could go on and on.

I dreamt of him on the Christmas morning for the second time. I've always wanted to dream of Dad and talk to him, I've so much to tell him. The dreams were disappointing because I realized, not for the first time, that I have no control over my dreams. I couldn't say to him what I have wanted to say. I pictured my dreams to be us talking to each, having a reciprocative conversation. But I shouldn't be complaining because at least I get to see him sometimes.

Labels | I Mean It

I got up 1.5 hours later than I planned to and finally got to the National Registration Department in State, PJ to change the address on my identity card. So I was there about half past 11. I was told not to get there too early as you'll have to queue for a long time to get a number.

So it was my turn to get my number and this scruffy looking Malay officer took over the counter from the Indian officer that was serving the others.

"Hi, how are you? I'm here to change my address"
"Why you change address?" (what stupid question?)
"Because I've moved to a new place"
"Oh, you must bring your bill or bank statement to prove"
"I've no bill or statement that is under my name. Can I use my driver's license?"(I couldn't be f*cked coming again on another day)
"No, cannot! Mesti bring bills"
"But I don't have anything with my name, I don't live here, I live in Australia"
"Then why you wanna change address?"
"Because I'm a Malaysian, I've MyKad and I've moved so I'm here to change the address on my IC!"
That freak was in deep thought for about 3 seconds...
"Oh... itu macam. So now you wanna change your address kan? (f*cking, haven't I made myself clear enough?)
"Yes, so can I use my driver's license as prove?
"Yessss... cannnnnn..."
This very helpful officer then gave me a number, #289, just 121 people before me, fantastic!

To cut a long story short, the hungry, thirsty and sleepy me waited for 4 hours before I got to my turn. There were 7 counters for MyKad application but only 3 were open, however, at most times, there were only 1 or 2 counters providing their tortoise-speed service because half of the time they were either chatting with other officers, drinking whatever-shit from their coffee mug while snacking on biscuit, or at most time, went missing. And I wonder why I waited for 4 hours.

I've not much of patience and they were definitely pushing my limit.

So I got to the counter, told myself that they were just doing their job and they probably were trying their best to help us get through this shit as soon as possible. So I smiled and greeted him. But that f*cking idiot was trying to compete with a 100-year-old turtle to see who was slower. Then that very smart officer who gave me my number had so much free time in hand and was not qualified to process application, he came to chat with the one processing my application. By now, the cranky bitch had taken over my body and I cracked it...

"Look, I had waited for 4 hours because you guys have been missing from your desk whenever you feel like. Now you're at work so if you wanna talk, get these done quickly so you can finish up and talk as much as you want!"

I was ready for him to fire back at me but f*cking hell, all they did was looked at me for a second, talk shit for another few seconds before getting back to my application, totally unfazed. What the hell!? They were trying to annoy me further, or they had absolutely no idea what I was going on about. Aaaarrrggghhh... these freaks!!! I just don't understand why they are so slow, even when they walk, holy crap! Has it gotta do with their diet? Lack of certain protein from this particularly important meat?

You peeps better not have to change address or lose your I.D. If you do, best of luck to you! I'll have to go to the immigration department to renew my passport tomorrow, they better not make me scream.
Lotsa Love | Lucky Lazy Lynn at 6:18 am 3 comments:

Today's traffic was surprisingly light. No last minute Christmas shoppers getting stuck in crawling traffic into 1-Utama's carpark. No long queues at Jusco supermarket after my grocery shopping. No annoying kids running into me. I assume a lot of fellow KLites have taken this 6-day long weekend opportunity to get out of town.

Our plan for tonight is to have all-night-long hotpot, suggested by the ever-so-smart yours truly. I came up with the plan on Christmas Adam and everyone at home was telling me... you won't get anything from the supermarket in the last minutes; the traffic's gonna kill you; let's just eat out; you can try going but am sure you'll end up calling and say you can't get anything...

Hmmphh! I'm so proud of myself.
Lotsa Love | Lucky Lazy Lynn at 9:38 pm No comments:

my boyfriend is the best

I've got the most wonderful boyfriend on earth, and he has just turned a year older. Although we're miles apart, I trust we're firmly in our hearts. I was supposed to be stuck in Melbourne during this Christmas-New Year holiday and apparently, he couldn't get tickets home. Found out last week that he had actually planned a surprise trip home for me and his family, but my Dad gave us a bigger surprise. As much as I would love to spend his birthday, Christmas and new year with him in Melbourne, I would rather stick with my family here. Guess staying close with my family at this time is the only thing that keep us sane.

Candyman was with me when Dad left us. He changed his plan, left work early and hopped on the first available flight to be with us. He managed to say goodbye to Dad, and that meant a lot to him. Out of anyone's expectation, Candyman's hand was grabbed the hardest when he reassured Dad that he'll take good care of me, although Dad was already unconscious. I'm glad that he was aware of our presence. I hope Dad has left his worries about me behind because I won't let him down.

I don't know how I was going to get through the first couple of days without Candyman by my side. He was there to support me when I was too weak to hold myself up; to tell me that it is okay to cry because that will make me feel better; to listen and talk to me when I couldn't sleep at night; to guide me when I was dreadfully shocked and lost; to make me comprehend what had happened and I can grieve but I've to accept it. He was just there when I needed him, that was very sweet and I really appreciate it.

Candyman was also been an angel to my family and relatives, by being around with us and trying his very best to accommodate to our tradition and culture. He had to cancel two business trips in the last minutes so he could be with us. Just what can I say about this man that has done so much for me? I know I've not been the best girlfriend who had her hissy fit whenever she feels like, who sometimes played too much and got a little irresponsible. Candyman definitely deserves the Best Boyfriend award, if there's such. I love this man who makes me laugh, who makes me cry, who wouldn't give in when I'm being unreasonable, who melts my heart, to death. I hope he's feeling the same way too.

Next year, he has promised.
Lotsa Love | Lucky Lazy Lynn at 1:22 am No comments:

Labels | I Mean It 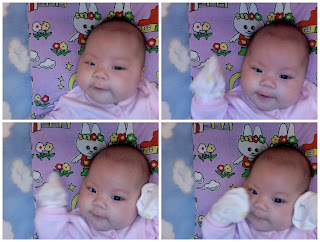 This little thing brings joy to our family in time of sorrow. She loves the musical mat that I bought her. She grabbed my finger tightly with her tiny little fingers and stared at me with her big beautiful eyes when I taught her how to shake her bon bon. She's an angel sent from God.
Lotsa Love | Lucky Lazy Lynn at 9:17 pm 6 comments:

all I want for Christmas is...

to have another chance to spend it with my family and that consists of dad, mum, brother, sister-in-law, and baby Chloe. I know this will never ever happen again and I need to understand that, and help each other in the family to comprehend that. It happened so unexpectedly I almost couldn't grasp. I wasn't expecting my return for a wedding would turned into the funeral of the most important man in my life.

I feel blessed for my dad to be able to migrate, like he liked to say, to a better place with no pain. He left very peacefully after having a last look at us. I'm very glad that he didn't go through much pain and struggle although I can't stop wishing that he could stay with us for a little longer. My dad is the most important man in my life, giving me the best he could offer, 26 years of good memories and his irreplaceable love. I can no longer be a brat and ask for more this time, can I?

I know tomorrow would be an easier day than today. Most importantly I need to be strong for mum because while we've lost our father, she has lost her life partner who she has spent most of her life with. Tomorrow has to be an easier day for everyone, by no choice.

Dear friends who have been calling and texting me, that's very thoughtful of you guys. I'm sorry for not picking up calls or replying to texts, I'm not avoiding anyone. I'm just tired and am not in the right head space to chat. I know you guys are calling with good intentions but give me a couple of more days. I promise to catch up when I'm ready. It has been a long 10 days and in case I don't speak to you guys before that, Merry Christmas and Happy 2008.
Lotsa Love | Lucky Lazy Lynn at 4:20 am 6 comments: