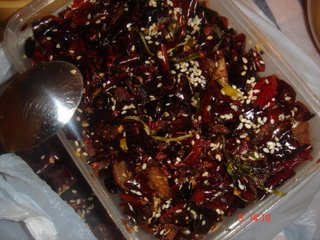 Got take-away from Dainty - Chilli Chicken and Spicy Prawns, they are just so painfully addictive. I have been eating them three times now for the past ten hours. I was in bed before trying to sleep and all I could think of was to have another serve of the Spicy Prawns with rice - yummilicious.

Had coffee with Pei Wen at Grecco after not seeing her for the longest time. She's one of the most innocent girl around, very kind and sweet. We had bad cakes and exchanged stories. This sweetie is going through some lows now but I'm confident that as she walks through life, she will be fine. Sooner than any of us realizes, she'll be looking back at where she is now, chuckling at her own naivety. As she had told me today...

To be old and wise, you'll first have to be young and silly.

Chilli anything really sounds good in this piece of the land.

Steph, ask Steve to take you when you're here.

Deisy, I'm sure you guys have food like that. Chong Qing/Sze Chuan! It's addictive!!!

tah pau for me when u're coming back!

Eileen, are you unhappy or something? Why d'you wanna kill yourself?