Mrs P owes me many many drinks

Likai didn't go to work today, hooray!!! At least I wasn't the only person who was hungover. Oh well, I woke up at 11-ish in the am and I was feeling absolutely okay but the headache struck me at about 2pm and I was in bed all day trying to sleep off my headache and I did. Man, we had 8 bottles of wine the bill says!

So Violet was right, I'm doing the same thing to my friends whether I'm in Melbourne or KL - getting them sloshed on a week night and make them suffer the day after at work.

By the way, very disappointed with Kaixin and Angela. One didn't show face and the latter left after a few glasses of 'fruit juice', booohoooo... There shall not be any Sunway/Subang for us in these coming four weeks because Angela has to compensate me for making me go to KLIA!

Because of Angela, I ended up in KLIA last night. I finished perming my hair in Mandarin Oriental wanting to get to TTDI to meet the mean girl. As usual, I wasn't familiar with the roads, I took the wrong turn onto the new freeway. I went to Selak Selatan, Bukit Jalil, Seri Kembangan, KLIA and took the usual road from airport to Damansara. I was friggin retarded!

The four of us woke up to the phone ringing from the reception, telling us that we were supposed to check out thirty minutes ago. We got ready as quickly as we could and checked out of Oaks apartment with massive headache. Thank heaven for the Panadol Rapid that Olga got us, we were all chatty and chirpy again when we were in the limousine on our way to Gold Coast. Even though I haven't touched any painkiller for years, I had to succumbed to it that morning.

Gold Coast was very touristy, as it was 13 years ago when I visited with my family. The apartment we stayed at, Q1, was conveniently located at Surfers Paradise. So the aim of this trip was to relax, unwind and rejuvenate. With that in mind, we went shopping for fresh food so we can make nutritional breakfast and be healthy. Right, Olga made us some vegetarian pasta for dinner and we all decided that we should just stay in and have a good rest after a bottle of wine and some punch although it was Saturday. We all agreed. 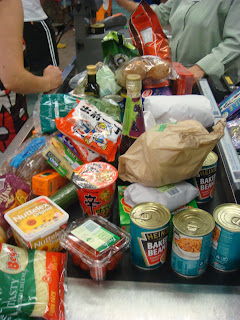 So the three (older) girls went to bed while I was chilling in the living room reading my book. The alcoholic in me ended up finishing three quarter of a bottle of vodka by myself, bleh... I was making this vodka punch that Charm and I created recently and they were absolutely divine. Tasted so good you wouldn't realize how potent that can be. That night I decided to go to bed at about 2am when the words in my books started jumping around...

Every thing seemed to be perfect and exciting when Mummy K, Sugar-sugar and I got to the airport on time and checked-in without excess baggage. Trust me, I thought I was bad with traveling light but those two women brought suitcases so huge we looked like we were going to Africa for three weeks. We were pissing ourselves all the way because Mummy and I were constantly making bimbotic comments and conversations.

Anyway, we checked-in to our apartment in Brisbane city and had a really good lunch at Cha Cha Char's sister seafood restaurant, Jellyfish. Every thing that we ordered were just beautifully, with a refreshing bottle of Villa Maria sauvignon blanc to kick-start our afternoon. Olga joined us later in the apartment and we happily finished three bottles of wines before getting ourselves dolled up for the evening.

And then... I realized I left my makeup bag in Melbourne. Oh My F-king God! You've no idea how important my makeup is to me. I can go without on a beach holiday but this isn't a beach holiday, it's Brisbane and Gold Coast (GC is too touristy to be listed as beach holiday for me). I was almost in tears, let me tell you, I was devastated. Firstly, I was already having the worst skin condition since I was 18 and feeling + looking fat like a whale because I was still not bleeding then. To make things worse, I've really sensitive skin so anything other than my own makeup will put me at risk of breaking out. Seriously, if I've friends in Melbourne with my house keys, I would pay them, beg them and plead them to get my makeup and bring/courier over.

Anyway, that wasn't going to happen. To make myself felt better, I told myself I've three chickies with me so I shouldn't let this get me down. So we were all looking pretty, feeling sexy (not so for me), rather tipsy and took the Citycat to Southbank for some Japanese and sake. We headed to Bowery Bar (Gourmet Traveller Bar of the Year 2008) for some cocktails after dinner. We spoke to some boys there and got them to tell us where is a good place to party on a Friday night...

We ended up at Zuri, the new Sun Bar that has recently opened its door. Classy and pretentious that's what it is. We liked it. Mummy was complaining how she hated the pretentiousness of others in the club, but after a couple of cocktails, she was rocking it hard with us on the dancefloor stage. We've also had the best Wet Pussies and Lemon Drop here, prepared like cocktails in a shaker then poured into our tall shooter glasses instead of pouring each ingredient straight into the individual glasses like every else does. Mummy and I loved it so much we had four glasses within thirty minutes. 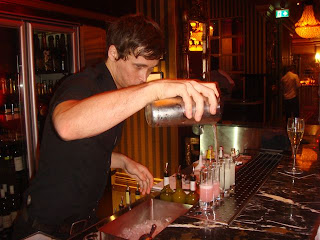 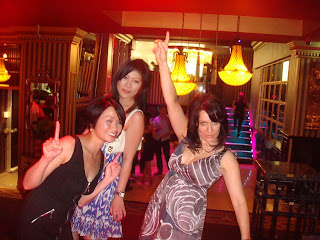 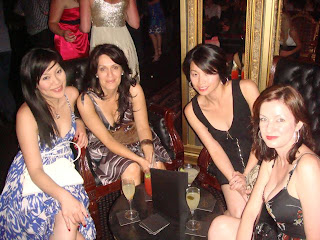 That night we ended up back in the apartment drunk, noisy and messy. We had another bottle of wine in the balcony while discussing about politics, socialization and others. We sure are more intelligent when drunk let me tell you.

Obama will be the next US president, wooohooo!!! I'm so excited for him and the world.

Because of some last minute major changes to my Asia trip, I have brought forward my trip to this Friday. That also means I've to get my skis and boots ready to go home with me two weeks before the initial date. So I sent my skis in for waxing, edging and tuning but I had no board bag to ship them.

I was planning to get the new season's bag in the middle of the month, like how every retailer was telling me that's the time of the year when they get them. So I was running around town like a mad woman last week looking for Burton's wheelie gig (in colours) but they only have the black one left. In case you haven't know, I hate plain black bags, so boring. I'm a bimbo, I like my board bag to be in girlie colours and print. I've always wanted something in pink or red.

Because it's the end-est of the season and new season stock wasn't in town yet, I was prepared to buy anything with a roller, and get ANOTHER new one when I return next month. Thank goodness I emailed Capital 17 trying my luck for the very last time and they replied to me this morning telling me new season's bags are in their sisters store, Auski! My car was illegally parked in front of Auski 15 minutes after I read the email and came home with a spanking new red wheelie gig bag soon after. 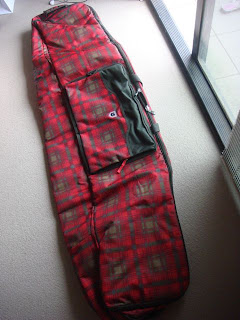 Great things do happen (just sometimes) when you keep trying. When you're at your most desperate and when you stay positive. I'm so happy I'm jumping around like a kid now!!!
Lotsa Love | Lucky Lazy Lynn at 5:41 pm No comments:

I wanna be a jetsetter!

I'm home from our girls-weekend-away in Gold Coast. It was the Melbourne Cup today and apparently the whole of Gold Coast was swamped by Melburnians who were eager to get out of the hustle and bustle. On the other hand, there are even more people who flew in to Melbourne for this national event.

Look, we planned to have a bit of fun in the bars/clubs in Brisbane on Friday night follow by a relaxing weekend from Saturday till Tuesday in the Gold Coast. I don't know what happened but we certainly weren't rested and came home feeling more tired than before. It was of course a great getaway but I'm absolutely knackered.

I'll talk about our crazy trip in details in the next entry. I need to crash now because I've 101 things to do before I go on another five weeks holiday in Asia tomorrow. These packing, unpacking, packing and unpacking again is absolutely draining, not to mention doing the laundry.
Lotsa Love | Lucky Lazy Lynn at 11:04 pm No comments: