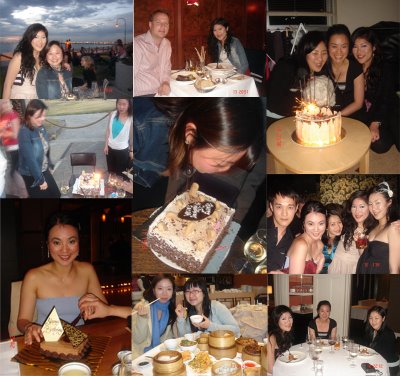 Time flies, too quickly. I thought the last time I caught up with Electrolux was a month ago but boy, was I wrong. It was in fact been five months that I've not seen him. Just what have I done for the past five months? Travelling, partying, drinking, good food searching, blogging, dating... it was indeed a lot that I've done.

We had dinner at Grossi Florentino. That was the place where we had our first dinner together, and tonight will be the last for us in Melbourne. He's leaving the country for good and I'm leaving for my summer holiday. He is a good man. A good man who bores me, sorry to say. I felt absolutely remorseful for getting caught for my eyes were wandering while my mind was straying, all at the same time when he was talking to me. I felt so guilty that I wanted to pay for the bill, thinking that it might help me feel better but of course, he didn't allow me to. On the contrary, he sent me a text when I got home, to tell me how glad he was to catch up with me and would love to have another dinner before I leave, erm... what the eff? He spent more than three-hundred bucks, talk most of the night, watched me day-dreamed and he told me he had fun? He is FFU - Fundamentally Fucked Up - as taught by Violet.

It was the most taxing three-and-a-half-hour I've ever had. What had happened to me? I am sure I had sat through many dreary dates before but this evening, my forehead was marked "BORED" in fluorescent. It was too taxing for me, both physically and mentally. Couldn't even be courteous enough to put up my cheery facade, I'm sorry.

Anyways, what I used to like - food at Grossi Florentino - had totally failed to impress me. Is that their problem or mine? Perhaps I'm suffering the consequences of good-food-hunting: high expectations, less satisfaction. Gave Jacques Reymond's degustation a go on Friday with Jessie and Milyn, it wasn't too impressive either, but much better than Grossi Florentino. For the past two months, Vue De Monde was the only one that made me jump, what say you?

My weekend was another round of food-athon. I even had to eat two dinners on Saturday, because it was both Jessie's and Sasha's birthday. Both are my very good friends and I couldn't afford to miss any of it. For that reason, I had my first dinner at Stokehouse from six, followed by Japanese at Koko at almost ten, pfftt...

Nineteen plates of dim sum for three girls were what Katie, Kylie and myself had for yam cha this afternoon. Partially my fault as I was two hours late *blush* Kylie was also to blame because she was telling me she can eat more than ten plates, I later found out that it was two f*cking years ago.

More dinners to come, both farewells and belated birthday. Bye bye my waist.
Lotsa Love | Lucky Lazy Lynn at 1:29 am

Labels | Food, I Mean It