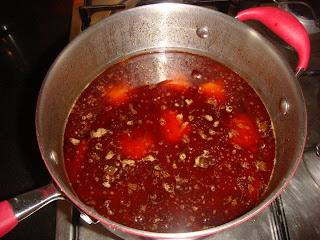 I have a thing for curry fish balls, those that you get on the streets in Hong Kong but not all are nice. If I find a nice one, I'll return and get half a dozen of it. The best curry fishballs for me would have to be Y2K cafe in Sydney's Chinatown. It's so damn good I buy a few boxes of them and bring them on the plane with me to Melbourne every time I visit. Wonder if I can still do that with the 100ml liquid regulation on board now. Anything half as good as Y2K in Melbourne will make me happy, unfortunately I haven't found a single curry fish balls stalls here, except for the frozen ones from the Asian grocers. I do get them when I'm desperate.

Anyway, I've discovered something not as good as Y2K but it's almost kick-ass.

I took away the leftover from dinner at Dainty's on Tuesday night. This time I asked for extra boxes for the soup/oil and chilli/peppercorn instead of taking the meat only. I cleaned up the pot and came home with 3 boxes of those. I put them into a pot, reheated it and added in some spam, fish balls and teochew fish balls (fish balls with meat in the middle). Oh my god, they are so yumm... I've been snacking on them and just kept adding more balls. Even the meat in the middle has absorbed the chilli, how great is that? They are so addictive and chewing the dried chilli gives you more flavour if you like things spicy.

Oh well, that's the story of my life - I still can't stop eating.

Queensland tomorrow and I had trouble packing. So I had decided to just bring everything I assume I might need. I shall get back to my chilli balls then go to bed. Have a good weekend peeps and for those who are betting, good luck with the horses!
Lotsa Love | Lucky Lazy Lynn at 12:22 am 4 comments:

Caught The Women at the cinema this evening. It was pretty crappy I would say although the cast was great. It's like a really bad version of SATC, although the movie is actually a reproduction of the 1939's original version. This group of good actresses just have no chemistry acting with each other. One thing that many of us would've noticed was it was a truly feminist movie - the cast was 100% female, there's no single appearance of male in it, not even anonymous walking on the street. What's funnier was the whole cinema was occupied by female only. It's really one hell of a chick flick!

Anyway, I'm still not bleeding and I've been eating all day. Seriously the only time I could stop myself from eating is when I sleep. For a person who doesn't really take ice-cream, I had choc-top in the cinema. I'm so angry with myself. The more I wanna lose weight, the more I end up eat. So I had decided to clean the apartment tonight and it worked, for a good couple of hours I didn't eat. Sometimes cleaning can be really therapeutic, just like cooking. I washed the covers, changed the sheets, vacuumed the carpet, mobbed the floor, scrubbed the bathroom.

I've so much junks at home I don't know what to do with them. Yeah, what's new right? Those clothes that I wanna get rid of is piling up. Can't believe I couldn't make it to Camberwell's Sunday market with the girls few weeks ago. I scheduled my flight to come back from NZ a day before market day, I loaded all five huge bags of clothes in the car, I borrowed and got TY to load the clothes rack for me, but my body just couldn't make it there. Damn... what's really annoying was I had to unload all those shit out of my car, such pain - physically!

Guess I'll sell my clothes and shoes on e-Bay but can someone teach me how?
Lotsa Love | Lucky Lazy Lynn at 2:12 am No comments:

stuffed and unable to sleep

I'm not the biggest fans but I'm definitely not against her. Have you guys watch Paris for President? It's freaky stupid... yet funny! Hilarious spoof of McCain's. Check it out - Paris for President
Lotsa Love | Lucky Lazy Lynn at 6:42 am No comments:

I cannot stop myself from eating and my PMS has heighten to a crazier level. Besides unable to stop eating, I can't stop cooking either. Last night I made three dishes and soup for myself. I ate 20% of what I made because there was just too much food.

We had Sasa's farewell dinner at Dainty's tonight, our favourite Asian restaurant in Melbourne. We meaning Sasa and I, while the rest were Peking Ducking in Collingwood! Yeah, we have no one else to get our chilli fix with since TY and Alice have gone, while Pat and Den are working interstate.

After dinner, I had Shanghainese dumplings at Sasa's before coming home to have more balls and spam that I've added into the take-away chilli soup/oil. I was still not satisfied hence I started making bak kut teh. Man... when is this mad-arse eating gonna stop? When am I gonna bleed??
Lotsa Love | Lucky Lazy Lynn at 2:45 am No comments:

Some months ago I bought a box of four glasses with cow prints. Eventually, I broke one, two and then three of them. I'm now left with one. So if you were me, would you
a) not care about how many has broken;
b) stop using it so the last one wouldn't break; or
c) throw away the last one cause it reminds you of the other three?

That was pretty random, yes.

I was chatting with an old friend on MSN and he was asking if I'm still partying hard. Of course I still party but I wouldn't say hard. Speaking of which, I can't believe I've to give up Global Gathering, damn! We were so looking forward to Above and Beyond, ATB and other international DJs. Because of some unexpected circumstances, Mummy and Daddy K are not gonna make it while I will have to be home for Dad's one year anniversary ceremony. Violet and Pat couldn't believe I was contemplating between going home and Global Gathering. I seriously have developed Mummy K's disease - Priorities Confusion Syndrome.

So I'm selling my GG tickets, still can't believe it! I've also missed Godskitchen this year because mum was around but according to Michele, it wasn't that great so I'm comforting myself that I've not missed much. To compensate what I've missed, I'm going to be partying back-to-back at Sensation and Summadayze. Don't ask me how I'm gonna make it, I don't even know if I still have the energy to party that way but let's just give it a try. It's gonna be fun especially when I've not been to raves since Armin in June (best rave ever).

For those who don't know, the one and only Asian night that I supported, Lavish, has come to an end after four years of kick-arse Fridays. From not liking Asian nights, to being there because my friends are there, to growing to love it; Lavish was part of my life in Melbourne. So much memories, alcohol, good music, photos and craziness we had together. It was rather upsetting to know that I can't just walk in like it's my second home on a sleepless Friday night. So the organizers had a farewell party cruise on Saturday night. It was freaking awesome, with bottomless flow of alcohol, familiar faces and those music that we loved. It was just like one last time of Lavish. Without a doubt, we were all off our faces. It was such great party. 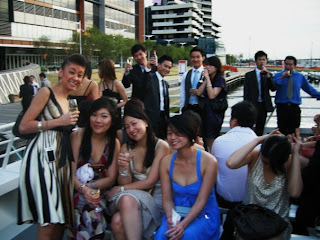 beach and asia I'm after you!

In the coming 6 weeks, I'll be doing Gold Coast, Singapore, KL and Bangkok.

I've given up looking for a full time job. With all these holidays lining up till March 09, who's gonna hire me full time? No one would wanna take me for even a casual job knowing that I won't be here most of the time, pffftt! But I promise, after Japan 09, I will stop myself from any more holidays and instead of surfing for air tickets and hotels, I'll be surfing on job site. Deal!

So I've 4 days to lose weight before Queensland, and I'm still not bleeding. Just tell me what can I do, people??!!!
Lotsa Love | Lucky Lazy Lynn at 12:55 am No comments:

Okay, I know. I've gone missing and the ladies are making noise. All my time was spent with mum in the past three weeks when she visited. Not only I have no time to blog, I haven't been following the fellow bloggers' news either. Anyway, mum is gone now and I'm recuperating.

As I am so used to living by myself, I got woken up very easily when she's up. Man... I was a walking zombie for those three weeks. Coffee and alcohol were my vices to keep me alive. It was like mum was the young and energetic one, I was the old and lethargic one, -_-"

She's been gone for five days and I'm still recuperating. Regardless of how much sleep I get, I still feel like I haven't gotten enough. It's probably because I'm stopping coffee too as I've already had too much in that three weeks. So while I'm recovering, stay tuned!
Lotsa Love | Lucky Lazy Lynn at 1:21 pm No comments:

I've been so busy since mum got here early last week, I hardly slept on the first three nights when she was here. Convocation's over and now we're in Kiwiland. The trip has been good so far despite the rain these two days. It was especially inconvenient for us today as we were visiting caves to look at glow worms and cave formations, and to the Maori cultural show and dinner.

Brief updates on what we've done...

I hated Auckland. Well, 'hate' is a strong word but I really didn't enjoy my time there at all. It's a half-dead big city with no heart - that's how I would describe the place. Hamilton was very charming and lunch at Scotts Epicurean was by far the best meal I've had. The coffee was comparable to Melbourne too! Our cockpit accommodation in Woodlyn Park was one hell of an experience. Mum was really excited about it and so was I, although it wasn't as comfy as I wanted it to be. I'll defo stay in the ship accommodation if I visit again. Rotorua attracts tourists (I wouldn't say visitors) with their natural hot springs, volcanic sites, spa, cultural show, etc. I love the smell of sulpher as soon as I enter the region even with all windows up. It smells like fart but much nicer. We're going to the mud and sulpher spa tomorrow, whee...

Looking forward to the remaining few days of our trip, especially Wellington. I'm expecting a lot. I shall go get my beauty sleep, nite!
Lotsa Love | Lucky Lazy Lynn at 10:38 pm No comments: