Would love to blog, at least part of it, about what happened to June's dress shopping on Sunday after reading hers. Well, I pulled out almost at the last hours in the morning - I was having a temperature in the morning - only if I can tell whether it was from the virus or the anger, pfftt... Therefore, Des went shopping with June and... errr...

...I can't fall back to sleep after speaking to June, nose was totally congested, which was good, because I ended up on Mt. Dandenongs, again, but this time we went to Pie in the Sky instead. Being a pie lover, I have had the most delicious pies I've ever had so far, the fillings itself was as good as a dish alone. Managed to replenish my herbal teas from the funky tea shop as well as a groovy RED teapot that yells Lynn, before returning to Miss Marples for scones and tea. Then, the most exciting thing of the day happened: I've got heaps of flowers, for merely AUD3.50! It makes me feel like an idiot for spending 22 - 28 bucks each fortnight on my oriental lilies from the city. Only if I've more vases at home...

I was once again feeling terribly sick when I was on the mountains, despite the healthy looking pictures. They were right, I need to keep myself warm in order to recover, which at the same time explains why I was perfectly fine in the clubs (oh so warm).

Dinner with Keat at Termini was good, two sick people with sexy voices feeding each other with gossips and updates over some decent food and a bottle of white on a quiet Monday St. Kilda. Having good friends around me never fails to grab the unimportant crazy agenda off my mind, always.

Bumped in to someone on the street on the way home, believe it or not, I could actually felt that I'm gonna bump in to him since I got up this morning. Didn't expect it to be out of the Arkley though, when I was least expecting. C'est la vie.

Now that the Malaysian has left for Vietnam/KL and the Swiss is leaving to Argentina, I shall catch up with some old (and new) friends this week, maybe the Chilean and the Norwegian. Not to forget my very special visitor - mum of a good friend who'd be down this weekend.

A montage of pictures speaks a million words... 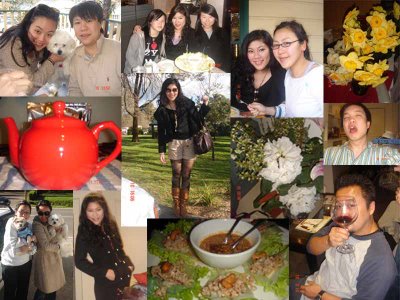