Since I can't be truthful to my naturopath that I've been seeing for one-and-a-half-year, I thought I should go to someone I totally not know of who I can be honest with and get treated as it should be. Thus, I went to seek for professional help from a Chinese herbal therapist, who I found on the yellowpages.com.au, to treat my flu that had been dragged on for three weeks now.

When I called and I got an appointment straight, I started to doubt about the place. Look, in Melbourne, unless you got crashed by a truck or anything along those lines where you need immediate attention, otherwise it takes you forever to get your slot to see a doctor (dodgy ones are exceptional). Simple example, when I needed a gynaecology check-up in August, I had to call more than ten different practitioners to allocate the soonest one, believe it or not, some even scheduled me to the end of the year *rolled eyes* We seriously need more medical professionals in Australia.

Another time, when I first came to Melbourne and I fell sick. I needed a naturopath or homoeopath. Called several places but they can only see me the week after, damn... if I can wait till the next week, I probably would have recovered myself. My boyfriend then kidnapped me to see some dodgy western doctor at Footscray, ggrrrr...

Back to the Chinese herbal therapist.

I thought Dr Xiao looked a little sleazy when I first saw him. As usual, I filled in my details, he spoke to me a bit, told me he worked in Malaysia before and asked some personal questions about myself. In my heart I was thinking - Damn, you better stop asking about me or I'll think that you're trying to pick me up, and he did stop, thank god.

One thing lead to another, the next thing I know, I agreed on getting an acupuncture (for the first time in my life, geeez...). Well, I'm not afraid of needles for sure but having some needles poking into my skin and allowing them to sit on all over my body is a totally different story, if you ask me.

After he was done with my back, he asked me to turn over to face the ceiling.

He laughed and then started to poke me with needle on my face.

Amazingly, I felt better once I got off the bed, regardless of whether the needles were performing their magic or it was just my mind over body. Who cares? I don't as long as I don't feel like I'm dying anytime soon.

I then came to understand that he has been practising in Melbourne for a good ten years already. I also took a quick peep at his appointment book, boy, it was full. Phew... silly me. I judged him too quickly. I suppose if he ain't good, he won't survive in the industry for so many years, would he? 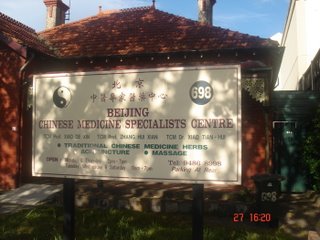 As for now, fingers crossed, I'll be fully recovered with the herbal powder he gave me before the weekend approaches.
Lotsa Love | Lucky Lazy Lynn at 6:24 pm

Labels | New to Me