I Have a Problem with Chicken

Yes, I do have a problem with chicken, a whole chicken. I'm shy to say but it's true - I've never touched a whole chicken in my life. Slightly more than four years ago, I was holidaying in Sydney for a month, staying at Jo's. I then attempted to make dinner for Jo and her then housemate, the pizza-faced-fattie-Kenneth a.k.a. denial queen. That was the first time I cooked a proper meal, besides instant food and eggs, and it was also my first time having contact with chicken breast meat. I teared, I was petrified.

To give you an idea how ridiculous I was, I got scared at the sight of raw beef fillet, Steph and Fern used to scare me with the raw meat in hand chasing after me while I yell in horror running away from them.

I was the bimbo-ish idiot, I admit.

Another incident of similar, also in Sydney - I was 'instructed' to make soup using pork ribs. I was again 'instructed' to clean the ribs before throwing them in to the pot. I was afraid of touching the bloody-looking ribs, so I came up with a brilliant idea - put all the ribs back in to the plastic bag, fill it with water, hold on tight to the neck of the bag, shake it hard and remove the water, repeat a couple of times. Jo was in hysterical laughter while I was in total horror, again I teared.

After much practices, especially now that I'm living in Melbourne, I've bravely overcome my fear for raw meat. Actually, I'm pretty good with them, proud to say, except for animal in their whole form. After our dinner, we went for another late night groceries shopping at Coles. Wanted to get some free range chicken drumstick to make soup but they were no where in sight, therefore, I opted a whole chicken (god knows what made me think I'll be able to handle it). Besides, it's also cheaper to get a whole chicken, naturally. 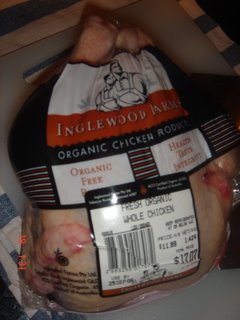 When I got home, I was very much prepared to chop the chicken into different parts before storing them, as advised by SP. I cut open the packaging, took the chicken out to rinse it, then... I freaked! I got really scared, the sight of a headless whole chicken in my hands was nauseating. Believe me, I was feeling really terrible, I quickly left the chicken on the chopping board, washed my hands and ran to the living room (which is not far from the chicken at all). 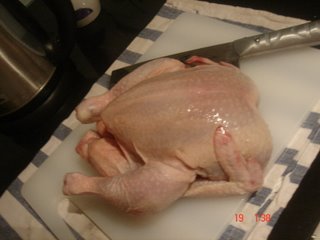 I panicked, I didn't know what to do, throw it away? No, it's freaking 17 bucks! Get it done and over with - just cut it? I can't get my hands on it. How? I walked back to the kitchen and saw the chicken and I felt weak, I know that was extremely stupid. I then grab my cell, ran to the balcony for some fresh air, and call SP for help. I teared while talking to her. It wasn't that I didn't try, I did, I just can't handle it, sigh... Finally, she agreed to come over to cut it up for me.

Sadly, I had to put the headless chicken in to a bowl and store it in the fridge before she comes over tomorrow to do the job, just imagine how clumsy I was with that chicken that made me went weak. 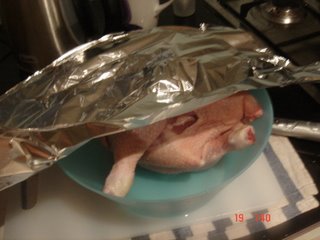 I was so terrified by the chicken, I can't even type well... 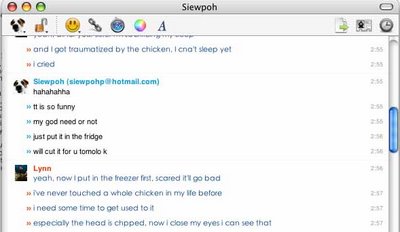 ahhahaha!! i remember!! u are so cute lah

look on the bright side, at least it wasn't a headless piglet..! ;)

Steph, I can't sleep last night and I got up early thinking of that headless chicken still sitting in my fridge.

I've seen headless pigs before when driving past a market, I couldn't eat pork for a couple of days after that, it was really gross!

lynn, i think chickens with their heads and ugly claw-feet still on are the ABSOLUTE WORST!!!
those freak me out!

Angela, thanks!!!!! Finally someone understand how gross they are. I solute to those people who can buy a running chicken home and slaughter them from scratch and cook then eat.

Trust me, I'll conquer my fear, when I can do that, I'll make chicken rice when I return to KL, you're definitely on my guest list, we can bitch and eat!

=) yay!
p.s. please, when you do make the chicken rice in KL, please please puh-leeeaassseeeee serve them in small pieces and not with the head and feet like at the CNY prayer session like that ok!!!
LOL

Trust me Angela, I will throw away those heads and feet far far far away before I serve, that is when I can touch a whole chicken. You'll be the 1st on my list man, cause you share the same mentality as mine on chicken.

June and Deisy, I'll make sure you girls are back for holiday at the same time and we'll have a chicken session together, no head, no feet, just bitches!