The answers are usually already in my heart, way before I knew it, regardless of how indecisive I seem to be and how I go on about being unable to make up my mind. I would've drag my lazy self out to buy my floral dress from Wayne Cooper with my discount voucher, which expires today, if I really love it that much. As June said, there are more choices out there at Myer *wink* therefore, I shall just raid Myer next week.

Now I'm in a love/hate relationship with June, after she unintentionally (well, I requested it) took me to Green with Envy on Bridge Road for dress shopping. I love her because the dresses there are so pretty and she's fun to burn a hole in my pocket with; I hate her because she didn't take me there earlier; I love GwE cause they stock a wide selection of Aussie designers under one roof; I hate because GwE made me spent $$!

Last week was a good week for my wardrobe - a full length green evening dress from Wayne Cooper, a pair of Ah Lian silver ballerina flats from Zomp Shoez that I thought was cute, a yellow spring-is-here floral dress by lili, a discounted transparent silk blouse by Moss & Spy. In the coming few weeks, I need more dresses for the races, the weddings and to curb my shopaholic withdrawal symptoms.

Besides shopping, I have had some good, as well as bad, gastronomical experiences over the weekend too. Dinner with aunt Mary at Pure South was fantastic. Menu was created using the freshest Tasmanian produce, that's where they got their name from by the way. Steak was awesomely juicy and tender, exactly what I wanted and the oceon trout that aunt Mary had was even better, cooked just so well yet subtle enough to not mask the freshness of it, impeccable.

Bento box at Meshiya had never tasted so good when I was sober. They've always been good but I thought it was the best bento box I've ever had, when I was pissed. Speaking of that, I was totally smashed from 9pm - 1am on Friday, don't ask me why or how, I don't know! Guess one of the girls must've spiked my drinks, however, I managed to behave myself during dinner, unlike Violet, who made so much noise, tsk tsk tsk... scared the shit out of the waitresses. Pat caught me and Keat semi-passed out in the car behind the lens, shite... but of course, I'm not showing anyone here.

Despite the good reviews by the gourmet experts and the pristine and chic interior of the Bluestone, the food was a big disappointment, not to mentioned the less than polite services we got from the young waitress. We were left unattended most of the evening, not to mentioned how we were 'treated' as some primary students where the so-called teacher rudely wanted to make sure her students were comprehending her briefing on the specials of the day. Oh, not to forget Milyn had to learn to say "puh-leezz" from scratch. Maybe they should name the place Bluestone Primary instead and hire someone with a titsy bit of experience to first teach the chef on the differences between medium-rare/medium/well done.

Then, something great happened to me, thanks to June and Desmond. They took me to yam cha at New Royal Garden in Syndal on Sunday, and I had the best dim sum till date. Trust me, when I say they are the best, I mean they are the best. They are not only generous in size, at the same time they also have satisfied those never-get-enough people, like myself, with a wide varieties. Yums... I want to go back for more, maybe tomorrow! That yam cha lunch had left me on a natural high for the whole f*cking day, think Desmond can't stand my non-stop bullet-like babbling no more, therefore, I was kind enough to give him a break by kidnapping June to go shopping with me! How sweet of me, haha...

Last but not least, Montemuzo's on Bridge Road, serves great Mexican fare (like I know very much about Mexican, bleh...). But Desmond the new food expert that I've found, who can tell me the differences between burritos and enchiladas from fajitas said it was good! And I thought it was delicious. The Sangria is worth mentioning here, very good and affordable.

Tonight is homemade hotpot night at Jessie's! I've more to blog about when I come home. Here's a picture to add some colour to this long word-y blog.

Don't judge a book by its cover, I looked fine but I wasn't. These are the crazy crew who rocked Lavish on Friday. 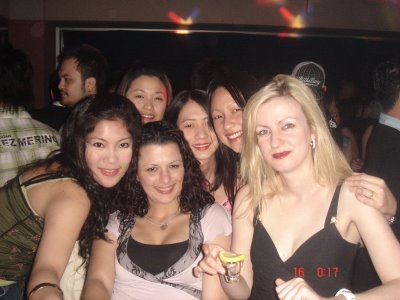