I can't believe my hangover actually lasted from Thursday morning till Saturday evening. Don't tell me I'm getting old as I don't take that as an excuse. It's the fake whisky and I'm positive.

Stayed at Looque International 2nd Anniversary Party for more than an hour *surprise surprise* Was suppose to be there half an hour before my arrival, obviously I'm still having a hard time learning to be "on time". Blame it all on my hangover, I had such a hard time getting dressed and putting on my make-up. Wanted to bail out but the thought of catching up with Steph kept me going as I've not seen her since I got back from Melbourne/Bangkok. And my belief of more booze to alleviate hangovers will always be abided.

Everything was fine after a couple of drinks (free ones included). Saw some familiar faces and met some new people through Steph. Realized that Steph and I have got very different taste when it comes to men, not a bad thing. The one and only man we could agree on that night was Andrew Westwood. He's usually not my type but for no reasons I thought he was cute. Saw him at my first Mambo for this trip and Eleana had actually tried to pick him up for me when we were both intoxicated enough to do almost anything. Oh my god, I was so embarrassed! I had no idea what she said to him and on Thursday, we just had a brief hello and I needed to run for my life.

Bumped in to Jamie. We had a long chat about men, women, race, culture and dating. Then I got conned by the bartender at the Loft as we were very much in to our conversation. To cut a long story short, they had basically over charged me for my drinks and when I realized that and pointed it out to them, which was 30 minutes after I've signed the bill, they came up with some really lame excuse and needless to say, I got nothing out of it. Fine. I learned my lesson - look at the figures before signing and stop talking while paying.

Also bumped in to the Velvet crew which was a surprise for me. Most of their managers and their new marketing director were all there before having to get back to Zouk to work.

I especially liked Dunhill's booth where they freshly rolled your preferred choice of fags for you. It's nothing new to the KLites but it's definitely new to me. You have to first use your own fag to exchange for another of your choice. According to Jeff, who likes to con me all the time, it's the new tobacco ruling where they can't give out free fags but exchanging is acceptable. Could be true. Anyways, their freshly rolled menthol was absolutely awesome but it had brought my hangover back, damn it! 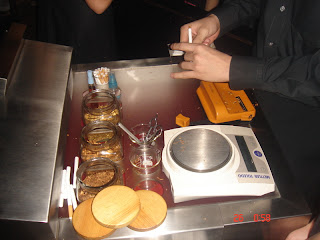 I was a bad girl on Friday night, thanks to Eleana and Danny. Highly unexpected but much appreciated. Wei Liang was such a sweetie for taking care of the two of us while he was suppose to go to Poppy to pick up more girls. I've promised myself to be at that stuffy place with him this coming Friday.

On another note, I had finished Mitch Albom's The Five People You Meet In Heaven a couple of days ago after having it parked on my shelf for years. It was such a great book and I really liked it. It keeps reminding me of whatever that I'm doing every second are in fact affecting other living creatures on earth, with or without my knowing, and it is very true. What we believe might not be the truth as for every story there's another flip side of it and it will never be possible for us to know everything. Hence, don't keep your hatred for someone for too long as what we believe could merely be misapprehension, which happens to happen all the time. It takes too much effort to be angry at someone and life's too short to be wasting those time and effort. On the other hand, I didn't really get inspired by Tuesdays with Morrie. It was no doubt a great and meaningful book but it somehow didn't quite inspire me, yet. Gave that book to my dad when I first got back to KL and hope he likes it but I doubt he has anytime for that.

It's been such a busy week for me and all I need is to sleep but this coughing from hell is not being very nice. Thank god it's the fifth day and it's my massage day tomorrow, hooray!!!
Lotsa Love | Lucky Lazy Lynn at 5:08 am

I don't wanna scare my friends here. Why not I send them to you and you post it up on your blog?