I'm Back For the Parties

Speaking of KL, I had recently discovered some new alcoholics in town. The existing alcoholics are still drinking as much as before, or more shall I say? This category includes Eleana, Steph, Jefferey, Rodney, Michael, Dylan, Eileen, Big Brother, amongst others. As for the new drinking buddies that I've found, they are David and Angela. Especially David, who claimed that his one and only hobby is alcohol consumption, I salute him and I love friends like this - never say no to alcohol and parties. 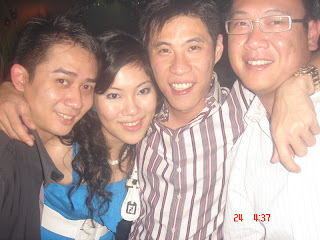 Caught up with Angela before Christmas and we ended up having four bottles of wine by ourselves, over seven hours. As Kaixin said, we had "suddenly" fell in love with each other, perhaps we did. She basically had told me her story of her life and I've shared most of the important bits with her. We could've stayed at the Sanctuary till they shut if it wasn't for her to report home.

I've been drinking much less back here in Melbourne *big surprise* Well, I had a few drunken nights (okay, more than a few) with memory lapse but I've been good most of the nights, really. For instance, I was absolutely sober on last Saturday and on New Year's Eve. Been having brekkie at 4-ish almost everyday and have no time to stay home except for shower and sleep. There are nights where I was so intoxicated that I've no idea what I was doing myself, and I still can't remember some of them.

Got to know some new acquaintances from the bars, erm... and some on the streets. Got to know Gillis & co on last Saturday night when both his group and mine were deciding on where to go on the street. He ended up buying all of us two rounds of drinks at La La Land and Jen bought everyone supper at four in the morning. He was a good bloke, or at least he had kept Jo entertained the whole night.

Got to know Nick (from Sydney for holiday) at Transport with Steve, Steph and Jo. We taught him to play the asian "Big Two" and he bought us all wine. Wow... these days strangers like buying drinks for us, I like!!! He seemed to be nice, intelligent, friendly and not bad looking, Steph and I thought he could be the perfect match for Jo. We were all wrong. Out of any of our expectations, he grabbed my waist at the end of the evening and asked me to go home with him. Excuse me, where did that come from? I mean... what have I done? I wasn't even talking much to him the whole evening (anti-social mode was on). Anyways, it was great that he made that move, now Jo can save some time watching tele at home instead of wasting time on him.

Not to forget Simon and the cute Brit at Mink Bar. We just love picking up new friends from all over the places.

Summadayze was a blast!

It was my first and I'm loving it, despite the inconsistent music which has the space of a jungle to improve on. I had a lot of fun mainly because of my fantastically cuckoo friends, the almost perfect weather and... I wish I could turn back time. 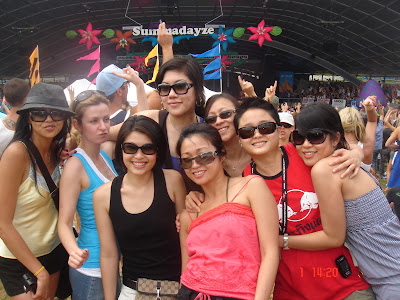 New Year's Eve was very ordinary for me, in the club, with the usual suspects. To be honest, I was a little disappointed with not seeing the fireworks. I was at the same time not quite excited about the beginning of 2007. Maybe I shouldn't, I don't know.

Was hanging out at some new bars as well as the regular places to catch up with friends for a few nights, it was good. Haven't seen Sasha till today, hope to catch her before I leave as I'm really missing her company. Will see if I'm lucky enough to have her for a few hours tomorrow.

That pretty much summed up my party and drinking pattern for the last week of 2006 and the first couple of days of 2007. Looking forward to a crazier one this year...
Lotsa Love | Lucky Lazy Lynn at 4:19 am

Michele, what a waste. I was hanging out with June for a bit at your spot. Don't worry, am sure we're gonna see each other again soon...

i am patiently awaiting your return...
=)