Holy shit, I can't sleep! I was wandering around like a zombie the whole effing day and didn't allow myself to nap just so to make sure that I'll doze off right at the time when my head touches the pillow yet my eyes have never been as wide opened as right now for the past 48 hours. God damn it!

My alarm is set to make noise at 4.45am, which is only about four freaking hours away from now. I'm all alert and awake.

Had two dinners with Milyn before I left Melbourne on Tuesday. Reason why was because the first dinner was very bad, in terms of the food and services. It's so bad, that I guess no where in Melbourne could beat them. Let me introduce you to the most awful restaurant of the year in Victoria - 1884 on Bourke Hill *vomiting*

The service of the only waitress was inexcusably bad to begin with. She didn't know what she was doing I supposed. We ordered two glasses of different reds and Milyn's glass was obviously less than mine, simply because she didn't bother to top it up with a new bottle after finishing the first, not even when we questioned her. Not only that, getting her attention was as hard as finding your earrings's stud in the car, possible but hard. She had also left us with the food without cutleries, and forgot to ask us how was the food at the end of our meal as she should.

The food, was revoltingly bad, that I was almost in tears. Milyn ordered a bowl of fries after making sure with the waitress that they are shoe-strings and not thick cuts. I don't have to say much, it turned out to be thick cuts. My duck confit entree sounded yummy in words but what I was presented was in fact rocket salad with shredded duck, wtf? My main was what sent me in tears, almost. I ordered veal chop and what I've got was veal fats hanging on to some bones on top of caramelized onion and mushroom that were way too sweet. I could almost get an instant headache from the taste of it. Milyn's medium scotch fillet turned out to be a piece of well-done chunk of meat. Look, you positioned yourself as a steak house and claimed to cook your steak in perfection. What perfection? My arse! Now if you can't perform in any other dishes, you should at least be able to prepare a decent piece of steak for f*ck's sake.

The one and only aspect I've enjoyed was the ambiance of the restaurant. It is located within the Somerset Gordon Place serviced apartment at Bourke Hill. That building is a heritage building and it is beautifully kept. I can't stop taking pictures of the interior and I was really curious of the interior of the apartments. Whatever it is, the dinner was a nightmare and I'll never eat at this place even if it's for free. 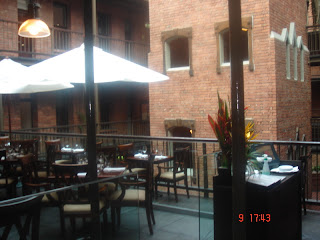 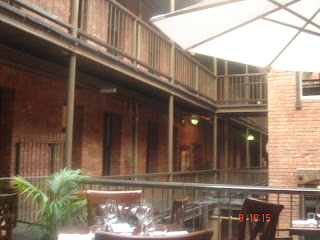 We then headed to Chinatown to get my last fix of bubble tea before having our second dinner at some Shanghainese place. Boy, eaters are we. Milyn, my loveliest dinner buddy, claimed that she MIGHT be able to shed some pounds while I'm away, hm... we'll see, darling.
Lotsa Love | Lucky Lazy Lynn at 3:07 am

Junie said...
This comment has been removed by the author.
7:35 am

the service was bad, that's why DJ got conned into buying water for $5... food wise was good.
i had my steak rare, probably that's maybe why they can't have room to make error... otherwise i'll send it back as well.
don't worry lynn, you're not the only one complained about this place.
the only thing nice about it is the ambiance....

I know how that feels like.
how bloody disappointing.

June, you were lucky to get "okay food". My food was extremly bad! So were my friends.

Kim, I don't believe in putting bad food in my mouth like yourself. Let's have GOOD food for dinner soon.