Bangkok II: I Didn't Shop Much But It Was Good!

My Aussie line rang while I was at the lights in the city. I got hold of my handbag and got my phone out in less than five seconds, thinking that it could be the Health Advisor calling. Weng Ho's voice was all I got from the receiver *sigh* inviting me to his farewell get-together tomorrow evening. What a shame that I'm in KL and I won't be able to see him before he leaves for London, which according to him, he won't be back for holiday for at least three years. Well, all the best to him and I guess I might pay London a visit either this year or next year when I graduate.

I'm down with the flu and the one and only homeopath that I know of and I see in KL is away for holiday, god damn it!

Shopping in Bangkok was madness, only in the markets and street stalls. Everything was dirt cheap and it made me felt bad at times when I bargained with the seller as it was already sooOOOOooOOooo cheap. If you spend enough time looking, you'll find heaps of vintage shops with good finds. I am not a big fans of vintage garments hence it was just browsing for myself. Wait... I did shop of course, but not much.

You'll be surprise, erm... I mean everyone was surprise that I'm the one who shopped the least. Eleana and myself expected to see Lynn goes cuckoo at Chatuchak market but I'm sorry to disappoint you (and myself), I was cool *wink* No doubt I was thrilled to return with a couple of dresses and some tops as well as a few pairs of thongs; some earrings, hat, skirt and some fisherman's pants. Other than that, they were mainly gifts for family and friends. What I splurged on most were the eye-masks from Boots, and some essential oil from the same place. I burned about eight to nine hundred Ringgit on those but it is still reasonably cheaper than in KL, and I don't get Boots in KL or Melbourne. 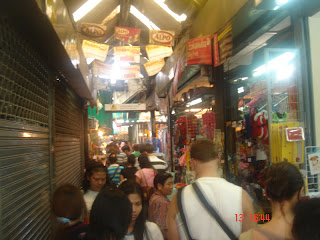 Holy shit, this market is HUGE! It takes up god knows how many hectares and it is about 45 minutes from the city. It opens only on the weekend and it was jam-packed with the locals and tourists, so it's not totally a tourist place, good. Things here are really cheap as many of them are the wholeseller and you get to bargain with them, but you've to be really good, really. I think I'm pretty good with that, ask my friends, they thought I was great in bargaining. Well, I suppose it's mainly because I wasn't eager to shop - whenever I liked something, I'll give them a price, if they don't agree with it, I just don't buy and walk away as I don't need them, and if they agree on it then I'll get them.

They have this large section in the market that sells pets' supplies, e.g. dogs clothings, beds, carrier bags, accessories, food, junks, puppies, squirrels... basically everything. My god, those clothes were so so cute, so cute that I can't help but to get some for my godson, Brulee. They are relatively cheap, compared to Australia and KL but the best was the choices you're given. Eleana went mad and got so much doggy's junk food, I believe he has gotten his year round's supply. Not to forget all those accessories and clothes that she's gotten him. Jeeez, these puppies are all spoilt. 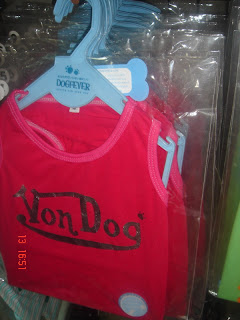 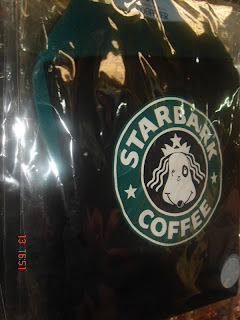 Half of the female fashion stalls carry the ah lian's style of clothes hence you've to really put in a lot of effort in finding the "right" pieces for yourself. There are also many shops that carries their own label which are pretty unique in their own way. I particularly bought a few baby-T from this shop that has princess sleeves with illustrations.

If you've the time and energy, you should go there for at least ten hours but I did only five and my arms had given up on my shopping bags. Eleana, Tracy and myself bought so much, I was at the verge of spending on this wheeled luggage bag so then we can all put our stuff in there but it wasn't cheap and the girls advised me not to. There are also men (and women) who hangs around the market with their trolley who tried to talk you in to hiring them to carry your stuff, smart. Thanks to Eleana who carries most of the stuff for me, you'll be surprise at how strong she is albeit being half of my size *claps hands*

Suam Lum Night Bazaar
Much smaller than Chatuchak but there are some stuff that you can only get it here. Price here is slightly more expensive but it's still relatively cheap for us Malaysians. I especially liked this shop, SE-W-UP, that sells tops that were machine-sewn by the owner himself. Every piece is different and its designs are pretty good. I bought two tops from there and had decided to not spend money on it as it wasn't too cheap. Alrighty, it was only RM25 each but I was planning to buy really cheap stuff from Bangkok.

Bought two gorgeous dresses which costed me only RM35 each and Baci is selling them for RM89, and it was much uglier than mine, in terms of prints and colour *giggle* I understand people needs to make money but what I'm trying to say is... Bangkok shopping is fantastica!

Siam Square
Quite a cool place to shop, with some local designers boutiques and some over-priced mass produced accessories and clothes shops. Managed to get a dress here with RM55 and the quality is not too bad at all, guess I can wear it even when the weather gets colder in Melbourne. I wasn't too interested in shopping by time I got to Siam Square, which was the day after Chatuchak and it was also the third day of my trip. All I wanted to do was to go for a massage. Hence, Eleana quickly grabbed her bras from the mall, Paragon, and off we went back to the hotel. 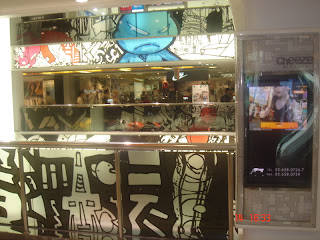 The mall is cool and I was surprise to see our Malaysian Vincci to be one of their tenants. However, Vincci is called VNC in Bangkok, erm... am just wondering are they trying to ape Mango (MNG)? Maybe. This is where I splurged on my eye mask at Boots and before I forget, their toilets were ultra cool. Shame that I didn't take a picture.

Bangkok (new) International Airport
It rocks! It was abso-fucking-lutely cool. Most international mainstream designers label are to be found under the same roof, I could hardly breathe when I was window shopping with Eleana. She reckoned that I was finally "back", as in the shopaholic Lynn had re-emerged. But I couldn't shop, I am suppose to save and I've promised myself to be a good girl. Good girl was I.

All in all, shopping in Bangkok was awesome, although it wasn't totally my kinda scene. But heck, I did shop quite a bit, especially on accessories. It made me feel stupid to pay full price in Melbourne. In comparison to China, I'd rather shop in Bangkok, speaking of cheap stuff. Their designs are much better (suits me better I would say) although a lot of them are really bad in quality but who cares? It's so cheap you can throw them away after two wears. The only two things I can't shop here are shoes and pants as I'm such a whale with big feet. Looking forward to my next Bangkok trip to explore on more shopping destinations.
Lotsa Love | Lucky Lazy Lynn at 3:04 am

Yeah it's darn cheap but you've to squeeze among people and sweat like a pig and carry like a dog. Think twice!!