I don't know if you feel the same as I do but bad food does ruin my mood, in spite of the fabulous pouring in the evening. I had two bad dinners in a row at some well-known restaurants, it was just so uggghh!

Just by adding "Taverna" at the beginning of the south-eastern sibling of Madame Sousou, the European/French restaurant has been converted to a Greek house. Holding the same logo, font and signage, yet we couldn't help ourselves from feeling disappointed knowing that Alevansi won't provide us the French fix of the evening.

Service was attentive if it wasn't defensive upon informing that we didn't expect to have Greek. Well, we were being honest and was trying to be friendly, trying to find out when had these changes happened but all we got was a defensive boss throwing us back with questions like what's the difference between French and Greek. Excuse me mister, we understand they are both European but the difference can be as far as the distance. 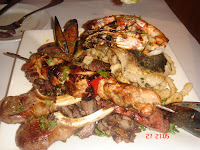 Anyways, the Saganaki was really yummy, one of the best around but the mixed grilled platter that we ordered wasn't fantastic at all. The platter for two consists of seafood and meat, but everything tasted the same to me - bad. Okay, the batter of the calamari was not too good, other than that, nothing made me smiled. The prawns were tasteless, the lamb was tough, the chicken skewers were dry and the mussel shrunk so much it almost went missing. I didn't even have the guts to order my coffee after meal taking into consideration that the food was so not there. Milyn reckoned the food was acceptable but Stalactites is better. Anytime, babes! 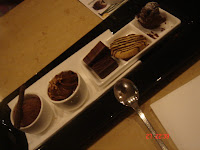 To compensate our bad dinner, we headed to Koko Black for some cheer-me-up desserts. Their chocolate platter, Belgian Spoil, will never ever disappoint me, teamed with my mocha, it was total bliss! 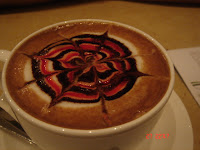 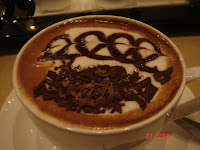 Haven't had Chinese for quite a long time hence three direction-less women were running around looking for the nearest way to Bok Choy Tang from the carpark. It was pouring and the traffic was bad, we thought Federation Square will be a good choice as we were starving and getting stucked in traffic for any longer was the last thing we wanted.

What can I say about this beautifully decorated restaurant with an open kitchen in the middle?

The service was offensively bad. Offensive because it was bad only to our table. We had observed the whole evening that they were all smiley and cheery to other tables except to us. The only difference between us and the other ten tables or so was that we've yellow skin and black hair, get what I mean? 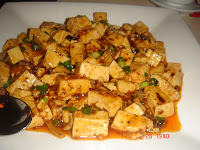 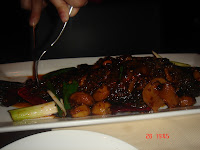 Frankly speaking, the winter melon soup with prawns and ginger was fantastic, with the shredded melon in the generous sized bowl, good for the colder months. The Ma Po Tofu with beef and Chilli Barramundi were acceptable, the minced beef can hardly be seen though. The two were delicious but no big hoo-hah definitely, like Jessie pointed out, Ling Nam probably serves better food. In a way, maybe they do. Their signature dish, Babao Duck was a real turn-off. The duck was stuffed with glutinous rice with chinese herbs, dates, ginger and others. The combination was just so wrong, the duck being tough and dry, the stuffing tasted so-so only without the meat. Well, what can I say if the team in the kitchen would assign something this disgusting as their signature dish? 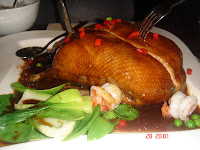 The three appetite-broken women went on to look for some comfort food again. San Churro tonight. What else was better than to have a cup of Aztec and servings of churros on a rainy evening? What's good at the same time is that they do soy option as compared to last night's KKB. 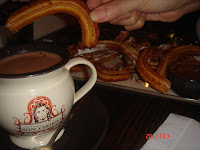 Feeling fat from all these sweet treats and big (awful) dinners these two nights. I, however, think it is still healthier than to hide myself at the smoky bars with bottles of Sauvignon Blanc if not the sugary cocktails, right?
Lotsa Love | Lucky Lazy Lynn at 12:38 am

Darling, when you write "KKB", something funny suddenly came to my mind...
Once upon a time many months ago...