Sir, I've Got an Addiction!

I am deeply in love with Riverland, merely because it managed to cheer me up totally, or was it Dan who did the job? It's definitely more than a bar, it's a joint where I can sit by the Yarra River among good looking people and babble non-stop, and nobody gives two damns! It's by far my favourite place in Melbourne, perhaps it had really made my day. While it's still warm at times, I promise to have breakfast there as much as I can. Sensational was the place.

News out of the bag - Dan is now a recording artist! He won some singing competition and he gets to release his own album, all written and performed by himself, on top of other prizes. Well, 6 out of 7 are written by him. I'm so proud of him. He is also performing at a restaurant every Thursday at Glen Waverly, one of you guys would have to go with me one day. The professional golfer has stopped DJ-ing after having to juggle between his music, golf and being a therapist for the blind. Geez... I'm so jealous, Daniel!

It's totally a shame for us to not have caught up for the entire 2006. I really don't remember what I've been up to last year, why was I so busy all the time? It wasn't a productive year for sure, but time just slipped away too quickly, so quick that it sometimes freaks me out.

Jevon reckoned that I've shrunk. HooOOOoooorrrrrraay!!! If he was right, then my dream had came true - shedding some pounds while I eat whatever I feel like at anytime, supper every night and no exercise. To be honest, I've not been on any diet but I've just developed the Malaysian stomach, as classified by Milyn. I used to be able to finish a three-course dinner by myself while dining with her at most times, however, after my trip home, I've adapted to the Malaysian portion of food. These days I feel sick after eating too much, in some ways, good for me. Secondly, I guess I've lost my water retention that I had before from all the sweating in Asia, it's just too hot, and I'm one who sweats easily.

Hence, my secret to shedding the pounds - live in Asia! I reckoned I've eaten more than most people back home but to compare to people here, pffftttt... I'm nothing. Boooo... I'm down-graded, so Milyn said. 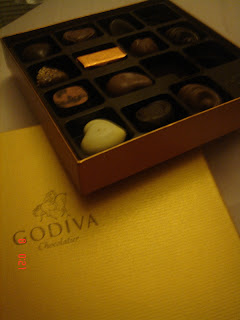 On another note, I've been snacking badly tonight. I was stuffed yet the first thing I did after I planted my fat-ass on my couch was to reach for my Godiva that is conveniently placed on my left coffee table, together with my Lindt box set and Koko Black's bar from Milyn. And the Tasmanian orange flavoured one from Jessie. I am regretting for not getting the 45 pieces Godiva.

Folks, listen up - None of you are buying me chocolates for the next eight months. Enough. I had a hard time recovering from the addiction a couple of years ago, and it won't be funny if I have a relapse. Having one or two a few times a week is a pleasure, having to have them everyday or I will not feel well is an addiction.

Speaking of addiction, I'm currently habituated to something but trust me, I won't allow it to last long. Let me finish up with what I have in hands, and I'll take a break from it, just to let myself know that I'm not emotionally hooked on to it.

I've so much to share, so much that I don't know where to begin and where to start. Too much had happened to my insignificant simple life, fluctuation of emotion, the unusual events and feelings that I've developed for the usual bustle or people. Gush of good news from the deeply loved and missed place.

Let me finish up my piece of writing for tomorrow's before I resume. Erm... actually I don't quite mind having some Godiva for Easter. They ship internationally on their website *cough*
Lotsa Love | Lucky Lazy Lynn at 12:00 am