The best things in life happened when I didn't plan... and they always will be.

After such big mad-arse weekend that I had last week, I was planning to have a quiet weekend this week. Planning being the operative word here if you haven't already noticed. Like many cases in life, things don't usually work out as the way we want them to be when we do actually have a plan. Hence, my party started on Thursday this week, and had been drinking since Tuesday.

Tuesday and Wednesday were under control, a few glasses of wine and went home early, proud of myself. Thursday, however, turned out to be a very memorable evening for myself. The initial idea of meeting up with Sasha for some catching up over a bottle of wine (no more, no less) turned out to be crashing someone's farewell party at Lanai and getting to know some wonderful colleagues of Sasha. The night didn't end after four bottles of wine and more at some other places, in fact, it went on for the whole night and morning, that I didn't quite sleep. It was such a great night but I couldn't help but wonder if things would be different if one is not leaving. Timing plays a big role in life, indeed.

Woke up on Saturday after 5 hours of sleep with a sore stomach, from all the exercising dancing at Lavish on Friday. We've not stopped dancing since we got in the glassroom and trust me when I say we went crazy. Thanks to DJ Chris for his new version of fabulous house music, it was rocking the whole night. Me and my cuckoo friends, as usual hogged the front of the dance floor the whole night doing our usual stuff - dirty dancing to each other, grinding and rubbing each other, going crazy basically. Like Violet would say, the 18s 20s are the one who are suppose to be doing all these but from the look of it, they're no where near us *smug* That had just reminded me that I'm the only 20-something among them, hooray!!!

Ken's plan to go to Alumbra at one-thirty didn't happen as the place was apparently empty. Well, it was pouring and that place is no good for that weather. We then planned to go to Two Floors Up when the night ended at Lavish but it wasn't open. See what I mean when I say everything I/we planned doesn't usually turn out well? Ken then picked up a Goth guy on the street and he told us where we can go at almost five in the morning. Before even asking for our (namely Violet and I) humble opinion, the three boys ran across the street in the rain, followed by Keat and Teri. We had no choice but to follow and got in to the Goth club. A Gothic club I'm talking about. Those animals headed straight to the dance floor. I looked at Violet, Violet looked at me; I told her I wanna go home, she said "let's go"!

With only a few hours sleep, Violet and I had a very late lunch on Chapel St. The traffic yesterday was crazy because of the tunnel closure and I was apparently the second last person to know about the big news. I'm proud to not be the last one though, thanks to Charm *wink*

Met up with June's group for a so-called mysterious bar tour organized by Vince but the mysterious bar wasn't mysterious at all afterall *tongue out* Had a good time having a few drinks with them, followed by a dinner-for-16 at Meshiya. Food was yummy; people were funny; and the company was groovy! 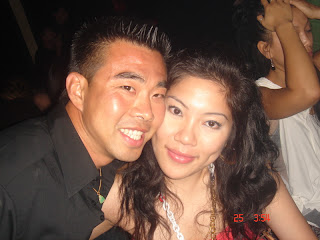 Arrived at Steve's unmentioned birthday party at The Order of Melbourne almost three hours late, taking the gang at dinner with me. I had promised my friends for drinks and dinner first and I couldn't just cancel it because I got invited for some "QUITE" drinks a few days before. The least I could do was to turn up late, phew... like I'm usually on time. My initial plan was to go home after the bar considering I haven't really gotten enough snooze but as you can already tell, my plan just went down the drain, straight.

I was in a way got kidnapped by Violet to Boulevard, the place I so didn't want to be at. I was sitting down most of the night, trying to cool myself down while constantly looking for a spot that I could get some cool fresh air supply. Looking at eye candies? Forget it, you'll never find one at this place. I lost one of my favourite wool cardigan by stupidly leaving it behind the DJ console - now you people understand why I would never leave my things around, especially my handbag, I wouldn't allow it to leave me regardless of how drunk I am or how crazy I get when I dance. For once after a long time that I give my trust and allowed my cardigan to spend some time with the DJ's feet, some idiot took it away from me forever. What can I say when I lost my denim jacket at Keat's birthday bash when we were in a private function room where everyone was everyone's friend? It's now water under the bridge and I shall just look for another light-weight wool jacket as rebound.

The blonde had finally agreed to leave the place at three and that's when I gained all my energy back. Revolver was it. Half of the group was at Third Class before and it was apparently very empty despite the good music. Revolver was all fun - funky people, great music, an additional hour for us to play as daylight saving had ended and a starving Lynn drinking milk at four in the morning. The bartender was apparently giving Violet the look when she got that for me from the bar. Of course, which idiot orders milk at the bar? I guess I'm the only one and let me share this with you - this is not the first time. Back in Atmosphere days, I usually get a glass of milk once I'm sitted at our regular table. The waiter just knew what I needed when I got there every weekend, am sure Eleana wouldn't forget this quirky habit of mine.

Got home at half past nine and had the best sleep for these past couple of days. What's left for me now are aching joints, sore feet, hoarse voice and a topsy-turvy apartment.
Lotsa Love | Lucky Lazy Lynn at 11:34 pm