Those Aren't What I Want!

I chanced on this really hot man at Eve on Saturday night. It's been such long time that I've encounter someone who had caught my eyes that way, believe it or not. Sad to admit but I think he does resemble the Health Advisor, the one that I can't help myself from thinking about from time to time, except that he's black and younger. It basically happened like this...

We were both on the dance floor; he checked me out; I checked him out; I told Violet the crazy bitch, she made me danced near him; he left the dance floor for the bar, Violet took me there; I got so nervous, I literally broke into cold sweat, I acted like a wacko; Violet felt like giving me a good big slap; we were back on the dance floor later; both our friends left and we were dancing with each other; we flirted with our EYES (only) for about 10 minutes, none of us said a word (WTF?!? Are we living in the 70s?).

Not long after the mute-flirting, I decided to give up. I went to the bar again, to get some drinks to cool myself down from the anger, I mean, what was wrong with him? It's not that I made things up but my friends did see him checking me out a couple of times, gggrrrRRRrrhhhh!

Okay, so I was at the bar, and this guy Tim came to talk to me, yadda yadda yadda... He told me that he was there for a friend's birthday. Excuse me Mr., did I look like I was interested in knowing? Eventually, he invited me to join him and his friends for some drinks, I crudely said 'no'. He returned to his friends, at the private section, where my hot man was hanging out at, F*ck!!! I should've followed him! At that point, I told myself for the second time, forget it.

Later, I was back on the dance floor again. Saw him and his friend walking towards my direction. His friend, Ronnie, stopped to speak to me, while he walked straight past me. You've no idea how frustrated I was, but I had to tell myself to chill and be cool. Danced with Ronnie for a little before I excused myself to the loo. He invited me to go over to his place for a drink when I feel like. Unfortunately, my skin isn't thick enough to allow myself to go over, it's just not my style.

So that was what happened to the first session of my night - thrilled to finally see someone who get my heart pounding, then frustrated all over for attracting the wrong guys. Besides his two friends, there were this old drunken man who lives in Southbank (hey, I really didn't ask him) and this young looking boy who I think he could be younger than me *big sigh*

At most times, you don't get what you want while the unwanted can't stop bugging you. C'est la vie!

Sexy Teri and myself at Eve 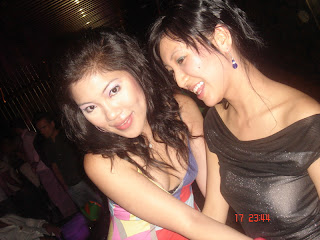 LL, u'r a disaster! and u'r turning into Violet ;)

See, Steve could tell I'm going to turn in to Violet eventually. No wonder he gave me a lecture months ahead!