We Deserve the Best

"When we were ready to give up our status of divas, some people just put us up there again, once again, higher than before"

The bouncer asked for our IDs, except for Eileen, hahah... that reminded me of Angela. I was more than delighted to present my driver's license. The amount of time I got checked in KL can be summed up with one hand, that includes that one time when Zouk got raided, two summers ago. I feel so young *wink*

I had never liked Poppy and it was one of the few places that I had refused to step foot in, merely because of it's outdoor setting, which was way too warm and humid for me, darn... it's like a night market. I hate places that make me sweat like a pig. However, last night we were all there, for our friend, Eleana and her new friend, who spookily looks very much like Chan Meng, ops! 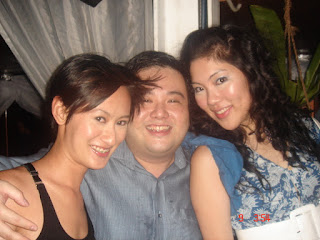 We were bought bottles after bottles of Dom before the club had ran out of them, almost perfect, if it wasn't so warm. Thank god my boyfriend of the night, the fan, didn't stop blowing me. If it wasn't for him, I could've melted and got washed down the drain. I just couldn't comprehend how can those people be squeezing themselves in the middle of that so-called dance floor, looking like they are having the time of their life, rubbing each other with their sweat.

Steph was lap dancing with my boyfriend, trying to seduce him but to everyone's surprise, he didn't even look at her, all he did was to keep blowing me, and everyone else. I mean, who on earth would turn his back on a hot chick? Hence, I was convinced that he was homosexual, I dumped him straight away. My boyfriend's twin brother, on the other hand, was a real head-turner. He had attracted several males and females to dance with him. 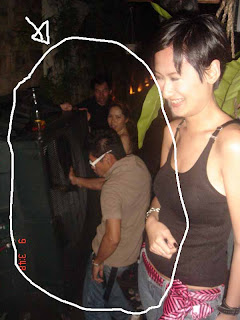 After my break up with the fan, we adjourned to Passion for some air-con and more champagne. I wasn't expecting much from the half-filled club but boy, was the music good. They were playing progressive house later in the night after some commercial house, shit, I like that place. Keat should be there with me, Pat and Violet on the other hand can stay at Poppy for their r&b and rub shoulders with the sweaty men *tongue out*

It's been such a long time for Steph to join us in clubs, drinking like there's no tomorrow, late night supper on Jalan Sultan, getting picked up by ugly men and last night, robbed the men with the roses. It was just the beginning of the party season for us, and everyone had already went cuckoo last night. Looking forward to what kinda mess we're creating tonight.
Lotsa Love | Lucky Lazy Lynn at 10:27 pm

i am secretly attracted to your ex'es twin brother... too bad he's homo

LL - i miss u so much i would party with u anywhere!

It's 40 degrees here!!! Your boyfriend can blow me anytime :-P

Writer, my boyfriend blows anyone everyone, he's the biggest slut ever, worse than the Health Advisor I guess.

For the ID Checks, I think any amount of crampy sweaty dancefloor is worth it!
Hahahahhahahhah!