Bumped in to Kelvin and Derek at Mambo last night. Due to the "low-quality" of men in KL clubbing scene these days, the two of them had instantly became the two of the few good looking men last night. Well, I've never categorized them as cute/hot (sorry, I don't lie so don't kill me for that) but at least they are tall and clean (not oily!). 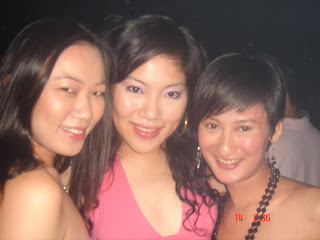 I was mixing all kind of different drinks last night - started with vodka, followed by whisky before that whisky x wine-cooler, and ended with champagne. I was expecting a hangover today as I went to bed with such bad headache but when I got up without much sleep, I was absolutely fine. No thanks to the annoying contruction work my neighbour's having, which was just outside of my window! They wanna have a fish pond at the back of the house, f*ck them, their back is so small and they can hardly walk, who in that f*cking home came up with the idea of fish pond?

How I wish there's a rule where construction work can only start after 1pm.

We were cam-whoring again last night. Why does girls like taking so many pictures? But last night even the boys were hogging the camera. There were this Californian guy and his friend who is a South Korean but lives in Norway that we got to know last night, who took quite a few pictures with us. I somehow thought the Korean guy, John looks a little like Peter, but John's much better looking. Am sure Keat would love to meet him *wink* 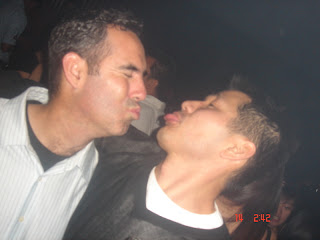 After I got woken up by the noises, I went down for an extra large mug of apple and celery juice. Girls, trust me, that helps when you've got a headache from hangover. Had my breakfast and read the papers, finished the Sudoku in the papers and wanted to sleep more. Then my maid informed me that the tradesmen are coming to repair the leak in my bath tub's piping, f*ck. Therefore I went for a massage instead.

It was so good. Honestly, Thai Odyssey is one of the best I've been to in KL. They are all Thai masseurs, very professional. Service is good and it's absolutely clean. They've also recently won some best reflexology award in Malaysia kinda thing, so I heard from one of the customer while I was paying. I've been going to this place for two years now I guess, everytime when I return to KL, this is one place that I cannot miss going. Every five days, religiously. I only do their aromatherapy relaxation massage instead of their traditional thai, as Angela said it's too vigorous, yes it is.

As I was going out, my dad was having his lunch...