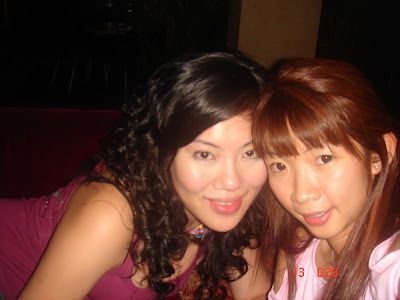 Phew... finally. I've resolved to Starbucks. The modem at home died on us, so the whole family can't get online. This is in fact the nearest place I can get in touch with the world, despite the ten bucks green tea, which I have heaps of them at home.

Managed to get four tops in twenty minutes while waiting for Angela at Pyramid. Didn't know that place actually has shops that you can shop *tongue out* It's been at least two-and-a-half year that I've driven to Sunway, since I've left Monash. There are a lot of road changes but of course I managed to find my way.

June was absolutely right. She told me before that me and Angela will be able to get along, and we did. For some strange reasons, I've told her a lot about myself although I've only met her twice. We've in fact have a lot in common, but she's smarter and has gone through a lot in life, while I still think that I'm a bit of a bimbo.

Stood Roy up for dinner. He was a little pissed at me I guess. Called him yesterday and he sounded okay, I know he's always the best, I know he can never be angry at me. A bit of what happened - we're suppose to have dinner at Hartams, I met up with Angela for drinks at Sunway. After a few bottles of wine, we decided that it'll be a better idea for me to just stay and keep drinking. So I called Roy while he was already at Hartamas. Not my fault, it's the alcohol!

So I went home with no dinner, wolfed down all the roast duck my mum kept for me and finished up the last bowl of soup at home. Took a quick shower and went to bed with a headache. Poor Angela has gotta work the next day, while I woke up fresh and nice after a thirteen hours sleep *grin*

Alright, next time we'll do something not alcohol related, if it is at all possible. Before that Kaixin and Angela has to take turns between Bangsar-Sunway. Now can we do Bangsar-Sunway-1-U/The Curve? Looking forward to next week's meeting.
Lotsa Love | Lucky Lazy Lynn at 8:53 pm

Hmmm... i suppose we can do The Curve 'cos it's like in between.. BETTER THAN BANGSAR LOR!!!
OMG, i just remembered something... i think i made a fool of myself while u passed me the phone. i forgot what i said to eleana...
ooooops!

shit. i think KX gonna be in BKK next week?!

you're back!
Mrs Pang is a psychic that's why you can get along with her..LOL...

dun worry... i think everyone enjoys telling her everything cuz she always have the best answer that's beyond your expectations.

Hey i am like a psychic genius ok. Not just psychic!
Yeah... call me Auntie Pang lor like that!

Fck i gotta charge by the minute next time...

Eh "Gold-Digger", u owe me damn a lot of consultation money woh!

by the way, trust me, i am a bimbo in disguise! all i need are bigger boobs and blonde hair...