So Much to Drink

My friends really don't like to eat, I'm serious. My initial plan (although I already knew it's not going to be as planned) was to catch up with Sasha, June & co and the bitches at Element Lounge for some after work drinks. I mean after their work, excuse me. Was planning also to go for some cheap and yummy dinner after some drinks but, as I've already knew it was coming, Violet didn't allow me to go eat with them. You know I'll never say no to her and I'll never leave without her, so there I was, on the liquid diet again. Thanks to Kennii who provided us some finger food or I could've fainted.

Food to me is like petrol to cars. I need food in order to function. Every three hours but in most cases, I'm happy to compromise the hours but you have to let me eat!!!

Us, the barflies stumbled out of Element while I couldn't remember much of who I've spoken to and how much alcohol I've consumed. Being constantly in need of food, I didn't forget to order some food later at Golden Monkey where the dumb waitress told me that the kitchen was closed. Bullshit! Due to the fact that I was so drunk and I was almost blind, I couldn't be f*cked arguing with them but tamely wanting to get some food from the convenient store instead. The nice bouncer took me to the restaurant next door to get some kebab and I was then hanging out with him at the door for god knows how long. All I remember was that his name was Michael and he couldn't stop giving me soft drinks from the bar. Very nice of him. The chef saw me eating kebab, she was very apologetic about what happened and offered to make me some food for free. Don't worry about it, I was happy with my kebab.

Milyn and I got picked up by three boys outside of the bar before we left. They were funny boys and if I've met them a few hours earlier, I am sure I would've invited them to join us for drinks. They were having a farewell party for one of the three, and he's leaving for Norway for work, two years. When he told me that, it totally reminded me of my Mr 20. Life's ironic in many ways and I guess God has been very playful with me, maybe he knows this is the best way for a playful girl like myself? I don't know but I just can't help myself from wondering, what if he didn't have to leave?

I ended up going to Lavish to meet up with the rest of the gang. I deliberately dressed down and carried a huge bag to prevent myself from going to Lavish but I should've known it wasn't going to work. One of the best things about Lavish is that we can get in regardless of how we dress, it's a promise, which is bad for me 'cause I will always end up there. I was still saying NO to barflies when they were persuading me to go at the beginning of the evening. I later said yes to Keat but I changed my mind cause I was hungry and I wanted to go home to eat (I'm lame, I know) but after the kebab, I changed my mind again. I finally had decided to drop by while I was in the cab as it was on my way home anyway (excuse, excuse) and got the Sleazebag from his place too.

Speaking of the Sleazebag, he's funny. He went to Lavish at 1am alone or with god knows who and got bored so he decided to go home after 30 minutes. He was texting and calling me the whole night and I told him that I wouldn't be going so he got no friends to play with and he went home. I had to get him from round the corner when I told him that I was on my way as he was keen to come out and play again. He was just too funny. I remember I used to despise him when I first met him, I thought he was arrogant, rude and full of himself (shit). Only about two months ago that I got to know him slightly better and he's just an over-grown child. He's quite fun to hang around with and now that we respect each other as friends, he somehow doesn't seem so sleazy anymore. Right, everyone deserves a chance to be known and we shouldn't reject a friendship too early. The sleazebag had the hangover issue like I do today and that poor thing had to go in for work while I happily shopped for clothes *giggle* and when I told him I might be going out again tonight, all he said was "enjoy your hangover tomorrow", what an idiot!

Yes, it's Saturday and I'm home. I had a hangover after lunch - I'm slow. While others get a hangover from the moment they got up and perk up later in the day, mine works the other way round. I got up okay, got all perked up after shower and started to feel like shit after lunch. I came home at about 7pm and the first thing I did was to shower my toilet bowl with the undigested broken rice before anything else. Speaking of which, I realize whenever I have indigestion, all the food that I threw up was always the carbs - rice, noodle, pasta, bread yet the meat seem to always get down well. Hmm... maybe I should cut down on that but I love my carbs!

Last night I was so drunk, that I remembered I walked home from the club, then as usual, auto-pilot mode on - removed make-up, showered, changed into pyjamas, climbed up my bed... I woke up this morning realizing that I actually ate last night. I made tomyam soup with the dumplings that I've made on Thursday night when I couldn't sleep. How smart am I? That shows how much I wanted to eat even when I'm that drunk. 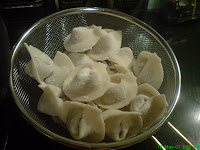 I've made almost thirty dumplings on Thursday night/Friday morning and I've finished them all within two days, delish! It was my ex-housemate the con artist who taught me to make dumplings and till today I still make them once in a while. We did share some good times together to be frank. The only problem with my dumplings is that I can't seem to find a good skin in the market and I'm not as good as to make my own dumpling skin. There are some okay ones from the asian grocery but I keep forgetting which one was that. The one I used this time isn't too bad and I don't mind using the same one in the future. 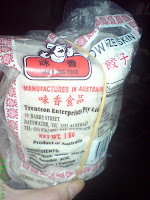 Ops... I feel like eating again. Going to make some food peeps. Actually, staying home on Saturday nights can be quite blissful.
Lotsa Love | Lucky Lazy Lynn at 12:54 am

I woke up once, trotted into my kitchen and wondered why there was a cup noodles wrapper next to my pink kettle. :) All in the name of a good night out eh?

But no matter how intoxicated I am, I still manage to make it through my routine too, of - shower, remove make up, moisturise, arrange pillows, light scented candles, sleep. :)

"Joe" who is constantly craving said...

i m damn amazed at ur party life..i already feel so old after 1 nite of partying..it was a long time since i was intoxicated other then by beer..n noo..i didnt make a mess in the kitchen..

Su-ann, we've been drinking too much. Our minds gave up but our bodies are the good girls who are doing their work, haha...

Joe, trust me when I tell you I've toned down a lot. Before, I was partying much harder than this and less messy. Age is catching up - partying less but more forgetful, damn!!!

Can I reverse the effect-cycle??

I am contacting you because I am working with the authors of a book about blogs, and I'd like to request permission to use the photograph you have posted in this book. Please contact me at matt@wefeelfine.org, and I'd be happy to give you more information about the project. Please paste a link to your blog in the subject field. Your assistance is greatly appreciated.