Had an early dinner with Milyn at Zio's on Wednesday as the silly girl needed to be home by quarter past 8 to catch Heroes. How many times have I told you to not watch the bad TV but get the DVDs or borrow the downloaded ones from friends instead?

I wasn't feeling too good on Wednesday, had a bad day and the flu wasn't helping in anyways. I was prepared to drink. The short but sufficient wine list do have a few good selections on it, according to my personal sommelier, Miss Chan. If it was on the weekend, we would've had them by the bottle. 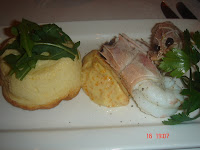 I started with their Scampi Souffle, almost perfect if it wasn't for the sogginess of the souffle itself. The flying fish roe mayannaise that came with the plate definitely deserves to be talked about here. It's was delish. The Duck Risotto that Milyn had was equally yummy in its pasta's way. I would say our entrees were definitely better than what we had later. 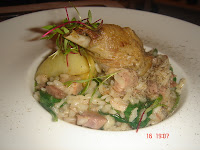 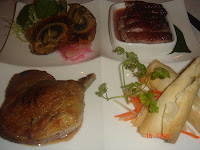 The medley of duck was a bit of a disappointment for me as it wasn't as good to the tongue as how it was presented visually and how it was written on the menu. The meat was a bit tough and dry. In fact, one of the four - the roasted duck did in fact tasted like those roasted duck from the chinese barbecue shop, pffftt! Milyn's veal rib-eye turned out to be a total surprise, it was crumbed and it wasn't even mentioned on the menu. We weren't very pleased about it but decided to not make a fuss (Heroes on at 8.30pm remember?). She couldn't even taste any of the hollandaise that were highlighted on the menu, hmm... 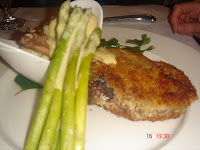 The dessert list looks appealing but the Malaysian girl couldn't even finish her main. Looks like I've three choices in the future - 1) entree + main 2) main + dessert 3) shared entree + main + shared dessert but either way, I know I won't be able to finish my main. Perhaps I shouldn't be greedy just stick to a main.

Considering the friendly waiter and the desserts that I've yet to try, I might pay a return visit, only after a long time, when the list of want-to-visit has exhausted.
Lotsa Love | Lucky Lazy Lynn at 4:51 pm