I had finally made a trip to the Asian grocery. As the ones in the city shut at 10pm, and my shopping hours are usually after 10pm, I can hardly get a chance to replenish my Asian supply. Instead of wasting my time thinking if I should make a trip to the city (which is only a five-minute drive *roll eyes*), I got the Lazy Lynn to the city. I needed to get out of this apartment and get some fresh air, even it was only for an hour or so but it was good enough for me.

I’ve at last collected my Armin van Buuren and Miss Saigon tickets. I was also in the city to make my health insurance claim that was suppose to be done six months ago but the stupid idiot didn’t allow me to get my money as I didn’t take my receipt along (I had my tax invoice with me, which is what I used to make my claims with all these while), f*cker! Great, now I’ve to make another trip to the city at working hours, which may take me another 6 months.

Back to my Asian grocery experience. I went there to get some pork gravy (the translation is so wrong, but that’s what they wrote on the board, freaking off-the-planet translation), the best part of the pork – juicy, tender and with no fats at all. Best to be used in making soup, unfortunately you can only get them at the Asian markets and not the usual supermarket. Since I hardly come to the Asian grocery, I asked for nine pieces and requested the grocer to pack them in three separate bags so I didn’t have to separate them myself at home before freezing them. He started chatting with me and told me that today’s pork gravy is really fresh and tender. I had no idea if they are fresh and he explained to me and taught me how to examine the meat. I learn something new everyday, no doubt about it.

Before he sealed the bags and after he weighed and price tagged them, he threw in additional two pieces of meat in to two bags. Whoa… what a sweetheart! Then I wanted to get some pork ribs to make bak kut teh so I asked for four strips and asked him to chop them up for me. He then asked me if I wanted them to be in separate bags and I told him there’s no need as I am going to cook everything at one go. He shockingly told me that they were enough for six people, what? No way, I explained that I’m not making other dishes, just this alone. He was very certain when he told me that even if I cook the ribs only, I could at least make two servings, opss…

Now I know why I always have cooked too much and had to finish my food over a few days, or sometimes overeat. No wonder I’m fat when I’m here. Portion control, sweetie. But first, I’ve to learn to shop moderately, control, control, control! I’ll remember now – two strips of pork ribs are enough for a serving. Pleasant Asian grocery trip today, free meat, free lessons.

Moving along… As I was so f*cked by my overdue assignments, I didn’t even have the time and mood to put on my contact lens or make-up, I went out looking like a geek again today. How dare I go to the city in glasses but honestly, I didn’t really care. Like it always happened, bumping in to people when I look my worst, I bumped in to Henri. Funny enough, he was in his glasses too and when we saw each other in the carpark, I think he felt more conscious than me. We kissed and said hello, looked at each other and he uncomfortably said “I’m not feeling too well, fell sick, that’s why…” So I quickly went “I’m rushing for overdue assignments, no time to sleep” before we bid goodbye. I turned while walking away and I couldn’t help but to laugh at ourselves. Vain pot meeting the vain pot.

Henri’s just an acquaintance and we hardly hangout since Chris had left the country yet we bump in to each other all the time, as in, all the time! But today, I realized he had grown up quite a bit, since when he’s so tall? I’m sure a lot of teenyboppers will be all over him. Besides Malaysia Marriott, I guess Henri is another boy that I think is cute. Excuse me, not that I’m interested, I see him as a brother and I like older man but he’s cute. Perhaps I should take him out one night when I go out with the usual suspects and see if any of my girls thinks he’s f*ckable.

Had dinner with Jessie, SP and Milyn at Ying Thai on Lygon. I was chopping my spring onion when Jessie called and I thought, f*ck the cooking, I haven’t had dinner with them for a long time. So I put everything in to the fridge, and put my pot of soup to low fire, grabbed my bag and off I went. Luck wasn’t on my side, I bumped in to another friend, Azran. We said hi and he was totally unfazed by my geeky bare-face look. Alright, I don’t look that bad after all, at least I’ve got the glasses to cover my dark eye circle that makes me look like a druggie; at least I looked better than at Pat's on Monday. Food at this place isn’t as good anymore (not like they had ever been good, I always prefer the Richmond one) and the servings had shrunk tremendously. Instead of increasing the price, they had made their portion smaller. It was so small they all looked like a side dish or entrée, geez… speaking of portion control.

With some prepared meat and ingredients sitting in my fridge, looks like the midnight chef is going to be in action again tonight… 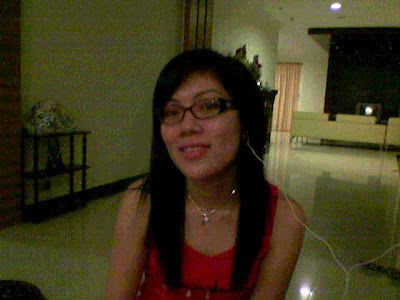 The geeky Lynn, three years ago
Lotsa Love | Lucky Lazy Lynn at 12:00 am

Labels | New to Me