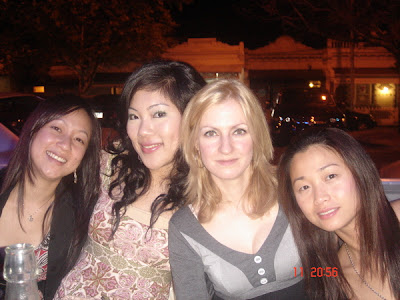 Apparently, according to them, they are all the same. Stubborn as I always am, I'm not convinced. Anyway, we had dinner at Cafe Zum Zum and I knew it was a Middle Eastern restaurant not a Lebanese one before I went, but I don't care, what was important was to spend some quality dinner time with my friends. When I told Violet it's not Lebanese it's Middle Eastern, she again yelled at me and told me that they are all the same.

Let me tell you, they are different! South Eastern food is a general kind of cuisine but there are a great difference between Malaysian, Thai, Vietnamese, Indonesian amongst all, right? So babes, we have to do Lebanese again one night, preferably before we leave for our holidays, please... Abla's it will be. 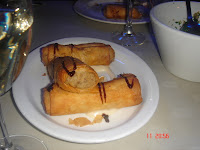 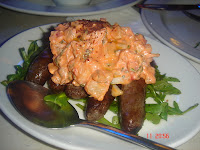 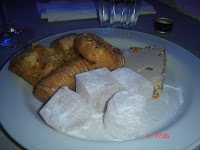 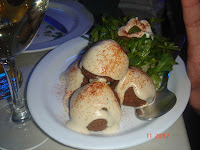 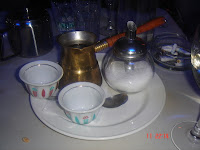 Back to Cafe Zum Zum, the food wasn't too bad at all. Although I didn't know most of the dishes' names, although not everyone on the table enjoyed the food, but I quite enjoyed the food and thought it was pretty good. Because it was the weekend and there were eight of us, we had to take the tasting menu that was priced quite reasonably - thirty-five per person. Speaking of the dinner, I did have a headache the whole of Friday, up until I drown my pain with enough booze. Hm... perhaps it was a sign of the flu attacking and I was only using the alcohol to temporarily killed the bacteria!

Spent quite a while at Polly for some no-nonsense cocktail before heading to Bimbo for some house music to dance off the big dinner and sugar from the cocktails. I came across Bimbo awhile ago while doing my research, came to understand that they used to be a pub and had repositioned themselves and turn it into a cool bar/club. Trust me it was a success. Crowd was young and mostly cool, music was funky and what I liked most was there wasn't any queue at the door or cover. Don't forget to check out the cool website. After all, I'm a bimbo and the name itself had already planted a good first impression in my head. June, we have a pizza and drinks date there, remember?

The night ended at Jo's place, eating her kitchen down and played wii till the sun said hello. The boys were still finishing their nine holes while I had to take a cab home, needed to sleep. 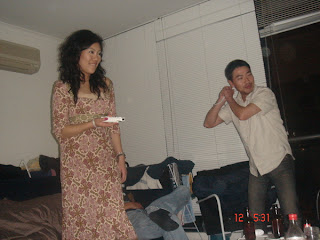 Very unlike myself, I am actually not looking forward to my Hawaii holiday in two weeks' time. Reason being I have tons of work to finish before I leave and it's killing me. Because I don't have exams and all assessments are assignment based, you can imagine how much work I've to complete in a semester. I sometimes ask myself - do I prefer to sit through the semester and study hard for a final exam; or do I prefer to be busy during the semester and be the first to enjoy my holiday while others are sticking their nose to their course material at the end of semester? I probably prefer just having to sit through the whole semester with neither assignments nor exams.

Got the virus from Violet - sore throat, runny nose, fever and a bit of cough. I remember it was about the same time last year that I've gotten the flu, also started from Violet and she has passed it on to the whole group. Back and forth, it was just too hard for us to recover fully. I hate falling sick. My two fears in life are falling sick and having no money, and the latter happens quite regularly, and I know it will get worse when I start working full time and my daddy will stop supporting me financially.

no worries, shall we have a pizza date after ur holidays? erm... i mean ur Tasmania holiday...hehehe

We'll do one week Bimbo, one week Lucky Coq. Do you realized the name of both outlet are very... haha! Wonder if they share the same boss.