What I've Been Eating

Was suppose to get up at ten in the morning to get my driver's license renewed but I was chasing my 9th dream of the day. I didn't get up till one-thirty in the afternoon and my poor mummy had been waiting for me for hours. She had apparently knocked on my door and called on both mobile and land line but obviously it didn't help in waking the lazy lynn up. Hm... my dreams must have been really interesting though I can't remember any of them now.

Got there at quarter to four and I was a little frustrated upon seeing the amount of people waiting. I was lucky to have an uncle to have given me his number slip as he had been waiting for too long and he had decided to leave. There were about sixty people before me and guess how long it took to get to me. Twenty minutes. Yes, you heard me right, merely twenty minutes. I'm absolutely impressed with the government department officers *hat off*

I've been to a couple of new and old restaurants for the past weeks and I especially liked a few.

It's a Japanese restaurant that serves mainly charcoal grill anything. Well, famous for the juicy lamb and beef, half of their menu consists of these both and being a meat lover, I totally loved it. Went with my mum and because she doesn't eat beef, we ordered mainly seafood and a portion of lamb. The lamb was amazing. Look, my mum doesn't take lamb because of its smell (I don't know what smell she's talking about), but she could finished a whole piece of lamb that evening by herself. She said it didn't smell and it tasted great and according to the waitress, they are very confident on their lamb and if it has got 'that' smell, they'll take that off your table as well as off your bill. Good thing was also that you don't have to grill them yourself but the waitress will do so for you, at your table. You'll also be served with their special sauce which was a mix of a few different sauces, smelly yet yummy. The meat wasn't marinated and spices were only used when they're cooking it hence you could taste the freshness of everything and it wasn't oily at all, pretty healthy. I was so stuffed that evening as I wanted to order almost everything from the menu. Thank goodness I've got a sane mummy who kept me under control. Would love to try out their "Paper Hotpot" the next time I return, sounds interesting. Their original restaurant is at Hartamas and the one that I went to is their new outlet at Tropicana club house. 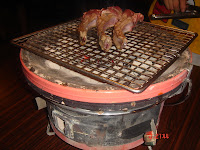 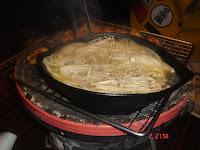 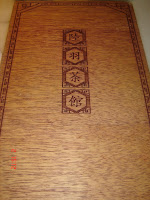 Best yamcha in KL. After leaving in Melbourne for the past two-and-a-half years or more, I've never liked yamcha in KL as the dim sum in Australia is so much better. Bigger in size, fresher and generally yummier. But being a yamcha fanatic, I still get my dim sum fix at least once a week. Hui Fen told me about this place on the lower ground floor in Starhill, opposite Shook. Checked it out with my mum on Friday for lunch and I wouldn't say their dim sum is fantastic but for KL standard, I think they are the best around. I like the fact that their prawns in the dumplings are huge and size of the dumplings are fairly big compared to many Chinese restaurants in KL's hotels. The skin of the dumplings weren't that great as it was a little sticky, like it'll stick to your teeth, if you get what I mean. 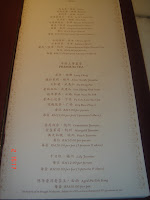 Loved their extensive tea list which can be quite pricey, e.g. Osmanthus Jasmine was RM10 per head (1 tea bud) and I get them from Melbourne for AUD5 for a pack of four. It doesn't matter as I really enjoyed my food there and their interior was pleasant. Lots of wooden furnishing, very chinese, very comfortable. 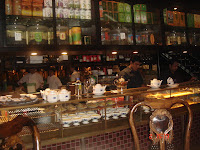 Also, two thumbs up for their durian pancake (oh no, I'm craving for that now), they are even better than the ones at the ever famous Lai Po Heen at Mandarin Oriental Hotel, believe it or not. Good thing is, for an owl like myself, they serve yamcha all day and night, on top of their dishes on their menu. Will love to try out their dinner menu.

They've got a couple of outlets around and I've always wanted to try. Emily suggested that place for our gathering with Cheryl two Saturdays ago and it wasn't too bad except for tasting a little bland. It could be just me and Cheryl, we don't know. I liked the varieties of pancakes you get from their menu, both sweet and savoury. Something different, worth a try. 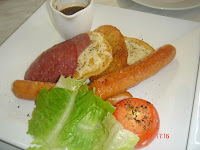 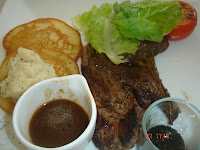 Formerly known as Bayou Cafe at Plaza Mont Kiara and this new outlet is now at the Curve at the corner right opposite Laundry Bar. I was a big fan of Bayou before and was a little disappointed to see that they had shut their doors. Thank god I've found their new outlet, thanks to their almost-the-same interior and soft furnishing, which I could recognized almost immediately. Hence, I made plans with the girls to have dinner there before hitting the bar across mid last week. The food was alright and funny at the same time. Kuan's spaghetti vongolia looked very much like the pippy in double-boiled soup chinese style with noodle; Jen Nie's chilli prawns spaghetti looked like sambal prawn dried noodle; and my chicken pie looked almost exactly like the seremban siew pau *giggle* we couldn't stop making fun of the food but it tasted actually alright. Kuan loved their chocolate cakes. 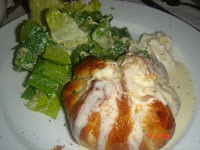 Last but not least, Zuup Soup Bar at One Utama, lower ground floor in between the old and new wing, is worth mentioning. Obviously they serve soup and being a soup lover, I didn't quite mind that the soup wasn't perfect in taste as long as I get a varieties of soup for me to choose from instead of that few choices on most menus at most restaurants.

Now I'm thinking where shall I explore for lunch tomorrow. And I've not yet visit my favourite restaurant in KL this trip home.
Lotsa Love | Lucky Lazy Lynn at 5:55 am

i love momotalo too! the one in hartamas. and i love that on one CNY a few years back, they gave Seann a RM5 ang pow and he was soooooo happy.
=)

See how easy it is to please Seann, only if you can be like him!

very funny you!
it's easy to please me too, i just need like a dozen of zeroes behind that 5!