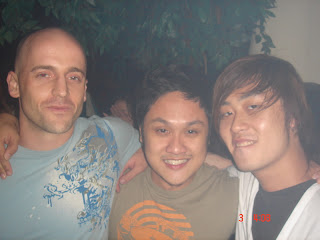 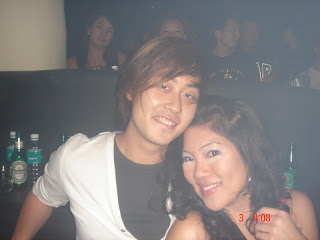 My Melbourne playmate, Jevon, was in town for the weekend. Only managed to meet up twice as we both slept too much. When he was up I was in bed; when I was up he was sleeping; when we were both up and it was time for him to leave.

Zouk was rocking when we got there with some guest DJ from Amsterdam, someone that we both couldn't recognize. His friends were all over the place and I was having one hell of a good time. Wei Liang was bored and almost fell asleep as it wasn't quite his scene (a.k.a. he's old) and Eileen was happily drunk. Jin Loong left so early without me knowing. Well, I was in my own world. I felt really bad as I refused to go home and the both of them had to wait for me at Terrace Bar where Wei Liang felt asleep sitting down. He was such a sweetie by insisting on waiting till I finished and made sure he sent me home safely. Was suppose to go to Jevon's friend's for after party but I knew it was a better idea to go home with Wei Liang.

They took me to my favourite beef noodle place on Jalan Tung Shin yet I didn't eat any. I couldn't put anything in my mouth but I had fun just looking at them while they ate. Trust me, this place serves the best beef noodle in KL, doubly yummy when you're badly intoxicated. Speaking of that reminds me of Wei Liang exaggerated reaction when I first took him there. He couldn't stop himself from telling the whole street (tables are on the street) how yummy it was and kept calling my name and asked me why didn't I take him there before, all in his loud voice. Thank you, now the whole street knows that the curly-hair-drunkard is called Lynn. Okay, that was besides the point.

Checked out Poppy as promised to Wei Liang before Zouk and that place was a shit hole. Didn't like it at all. Passion was even worse, less than twenty people in there. Bumped in to a couple of my brother's friends who I couldn't recognize but am sure they've no problem pointing me out as I bear a resemblance to my brother, but I'm prettier for sure! We managed to finish three quarter of a bottle of Absolut and rocked up to Velvet just to have a look. 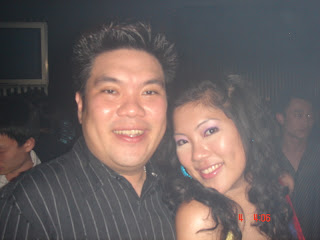 Saturday night was another (un)expected crazy night. I've to say that services at Velvet is really bad. I remember those days when we used to hangout at Atmosphere and we had our regular same table every Friday and Saturday, the services were fantastic. We got at least a waiter to ourselves and that was the time where I tipped the most in my life. I thought they deserved it and it was no wonder we (as in at least four tables of us) had to report ourselves there on both nights on the weekend.

Poor Leeza had gotta run around the place to get us glasses, ice and everything on Saturday night, f*ck the service at Velvet Underground. The gang and myself were in pretty bad mood after waiting for our bottles, glasses and everything else. I get frustrated when I'm in a noisy club with no alcohol in my system, call me whatever you like but it's true. Felt much better after some drinks and I was running around between Velvet and Zouk. Was texting with Jevon the whole night as he wanted to come over to meet up with me while I wanted to go over to where he was to meet up with him. Both were smashed and we couldn't decide who would be the safer one to travel. We ended up not seeing each other. Pfffttt, speaking of decisions between us. 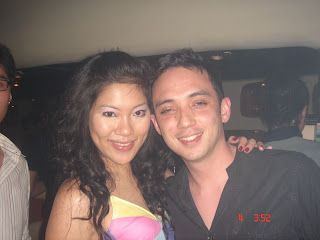 The regulars weren't at Velvet that night but I've bumped in to many old familiar faces, like Jamie. The night ended with me doing the familiar old silly things and lots of unexplainable stupid pictures, e.g. being the Wonder Woman among the Spiderman in their undersized outfit and wearing Allan's glasses and posing with him? I don't know what we were trying to do. 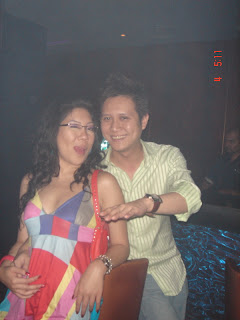 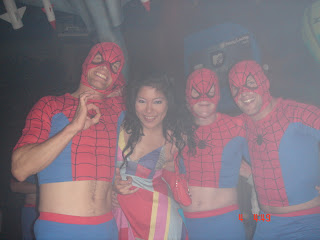 Finally checked out Somo at Mont Kiara last night and it was pretty good. Well, I suppose it will only be good on week nights as that is an outdoor chill out lounge. Just imagine how warm it is going to be when it's full of people. So last night was great - Sunday night, a couple of tables being occupied, comfortable couch where I can put my legs up *wink, Ange, wink* a bottle of white followed by the second then third... and friendly waitresses. Don't mind going back on other week nights but no thanks on weekends.

Looking forward to this coming weekend and have I already told you that I'm not ready to leave KL?
Lotsa Love | Lucky Lazy Lynn at 1:35 am

will someone open a place like that in SUBANG already!
or do i have to do it myself?!

argh. all the good places are at least 30 minutes away from here.
tiu.

Hellooo, I live in PJ too and there's a lot of travelling for me to go down town, at least three times a week and I've never complain.

Get over it and get used to it!