From Hero to Hangover

I'm having the headache from hell and the tradesman is servicing the lights in my room before Chinese New Year. And I refuse to sleep in the guest rooms so I'm stucked here in the living room watching the cable and was surfing on youtube.

If you know me well, you should know I'm one person who rarely throws up. Don't know what got in to me but I've been having this puking marathon lately, erm... for the past one week to be precise. Last Wednesday I'm pretty sure it's Velvet's bottles and we were among the unlucky ones who got the fake ones. That night was disastrous and that hangover was madness. And on Friday, for some secret reasons, I threw up once before heading home although my mind was almost sober. Me and Eleana both took pictures of our "end product" and I was contemplating of posting them up. It's disgusting and I'm afraid that people who reads this blog will curse me for posting them up, what d'you reckon?

Last night I managed to hold it in till I got home, not bad already. Eleana and I were the hero in the club, drank with almost everyone we knew in both Velvet and Zouk, and had to live with a hangover today. It was a madhouse outside of Zouk as the queue was so long, Wei Liang took an hour to get in, my god. I can't remember much after the shooters at the bar with Wei Liang. I know there were road blocks and the cops asked Jin Loong if he drank, he told him in Malay that the girls (namely Eleana, Alice and myself who were all badly smashed) drank and he didn't. Looking at his sober face and our f*cked faces, the cops just let us go with no delay. Great. 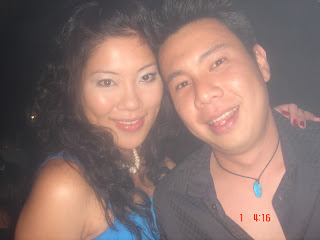 Finally got to see Adrian the dumbo after he went missing from the clubbing scene for the longest time. I was actually quite excited to see him and we were catching up a little and then I started bitching about Emily Cheah in front of him. Knowing him, I am pretty sure he's gonna turn around and tell her about what I've said. Great. It'll be nice for at least she'll know that I really don't fancy in being her friend and she can save her energy on making up stories about me and tell the world about it, oh... and dirty other people's toilet mats with shit, apparently *chuckle* 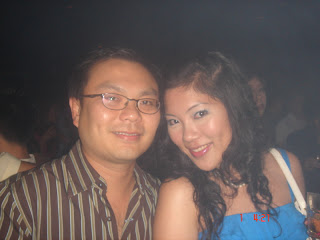 Realized that my martial arts master, Edwin, can be a real sweetie despite the occasional impudency. As oppose to people like the Roasted Dragon and Caterpillar Balloon, who are only nice when the wind blows at the right direction.

Was suppose to meet the college-girls at Bangsar at two but I was still in bed at that time. I felt so so sorry but I really couldn't get up. Whenever I moved I felt like I was going to chuck. I got up to a phone with about a dozen of miss calls and thank goodness I didn't quite have a hangover after my shower. No headache, nothing. Got to La Bodega unfashionably (two hours) late and I was expecting a lot of yelling and screaming from the on-timers but they were absolutely sweet and understanding, phew!

Everyone hasn't changed much. Alright, I see Eleana almost every other day. I see Steph almost every other week. Elaine, she is now a real woman and is still seeing her seven-year boyfriend, amazing. Lai Min's a reluctant workaholic who has finally put on a little weight so she looks much healthier now. It was a shame that Yen Li has to work today as I don't remember having the six of us sitting around together since we graduated from The One.

Finally got home from my dinner and my headache is still bugging me. Need a good bubble bath and watch some bad TV before hitting the sack.
Lotsa Love | Lucky Lazy Lynn at 12:13 am

Then she can't run before she shits or everything might fall out! You reckon she wears adult diapers?