If you ask me, I'll say that Chinese New Year has never been my favourite festival - too crowded, too noisy, too many people hanging around at my place gambling, too many smiles that I've to put on to the visitors, too many visits to the relatives', too much traditions to follow, too early for me to get up on the first two days. And before both my grand parents passed away, we had to go back to my dad's hometown, Taiping, every year for at least two nights from the eve - too long of a journey, too many people in a room, too crowded under a roof, too hot while the house is not fully air-conditioned, got woken up too early because of the noises, too bored being stucked in a small little town with nothing except for quite-good-food.

The things that I enjoyed and still do are yee sang (raw fish salad) with family and firecracker! 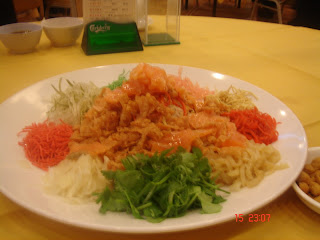 Yee sang is something that you can only get it in Malaysia and Singapore during Chinese New Year. I wish they have that in Melbourne so that I can eat them everyday when I return *frown* Can someone tell me how can I make that sauce in yee sang so that I can do it myself back in Melbourne, pleaseeeeee...

Had two 8-foot firecracker in front of each entrance at home at twelve before. I totally loved it. Can we have that every evening after dinner? I know it's against the law and it's suppose to be banned but look, we're Malaysian. Someone else is gonna be lighting them up even if we don't. Sorry, I'm uncivilized in that way. My neighbours here are mad over these firecrackers, and let me ensure you, they are not cheap. I've not stopped hearing the fireworks and crackers like there's a rival going on - whose one lasted longer with fancier fireworks. Well, thanks to them, I got to see them for free. Asked my brother to buy those extravagant firework in a box which are really beautiful. I don't understand why he didn't get them this year? Must be trying to save his moolah to fill up those red packets that he needs to give out, instead of receiving them this year. Fingers crossed he'll be able to get them before I leave.

It's late now yet I can't sleep. The thought of me having to leave in a few days time isn't a pleasant feeling. Good thing is that I didn't tend to start on something that has no ending like what I did last summer. It wouldn't help at all in making me feel easier to leave. But somehow...
Lotsa Love | Lucky Lazy Lynn at 7:00 am

Oh my god!!! Can you please make a booking for Sunday. Let's go let's go.