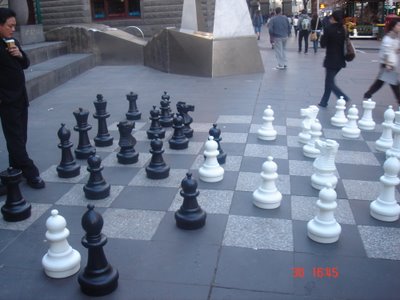 I've came across this on Sunday evening, right in front of L'incontro on Swanston Street, while I was making my way to the cinema. With my Boostie on one hand, and my camera on the other, I quickly snapped it, thinking that that was not for me to miss. But heck, I later found out from Diana that on most Sundays, there will be people playing the "chess on the ground" on that spot. Jeezz... how many Sundays have I been sleeping in? I thought I've been going out a lot on Sundays this year round, hm... guess I just don't hang out at that corner of the city. Too much Cookie.

I'm finally boiling myself some soup after a very long time. Get to drink it in 45 minutes time (I insist on boiling my soup for at least three hours), yummy... I've been so busy lately that I hardly have time to be hanging around at home to make soup. Cooking is different because I cook and I eat, there and then, but soup, too much waiting time needed! I used to have this policy where regardless of how regular I eat out, I will have to have my soup at least once a week, preferably twice a week, however, I've not been doing that for weeks after weeks, time to be more disciplined.

Talking about being busy reminds me about my poor time management skill. Let me confess this - I've never been on time for classes for the past 6 months. It's wacky. Regardless of how much earlier I get up before hand, I can still manage to be late, and sometimes, very late. Not to forget an important point, that is I'm kind of a scatterbrain, like I'll go for class forgetting my books/notepad; forgetting my cellphone for a zillion times and have to run back up to get it as I'm one who can't go out without it. One of the funniest (not) and recent one was that I promise to pick up SP from her carpark at QV and send her back to Collins so then she doesn't need to walk under the rain and cold. About 3 minutes later (which was the time between me walking to my car, got in and started the engine), I had totally forgotten about my commitment and drove straight home. Poor SP, waited on the street in the middle of a cold and wet Melbourne midnight.

Few days back Ming was just teasing me about my electricity bill. It was extraordinarily cheap, about $106 for three months. No one believes me. Ming said I'm one of those customers that the company hates, doesn't make money out of me. He kept asking if I actually live in my apartment. How much electricity can I use when I sleep? I don't iron my clothes for sure, and I hardly blow dry my hair anymore (do I look like I've time to do that when I'm constantly late?), I don't feel cold much (cause I'm disgustingly fat) therefore I almost don't use my heater and electric blanket, and I've been out so so much lately. I guess what I've saved at home had all been going to the oil company, darn.

I've got an early appointment at quarter to ten tomorrow. I've got this problem where I can't sleep when I know I've to get up early the next morning. And by time I fall asleep, which is less than 3 hours before my waking time, I'd refuse to open my eyes. How am I going to get up at 8 tomorrow? Or shall I not sleep?
Lotsa Love | Lucky Lazy Lynn at 5:10 pm