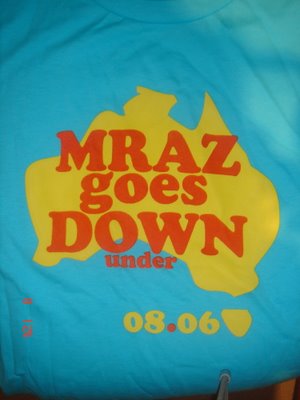 Jason Mraz is such a genius when it comes to wordplay, as he himself wrote, he's a wizard of ooh's and ah's and fa-la-la's.... His virtuosity in words-jumbling had caught my attention not long after his awesome vocal. Despite feeling a little dizzy from my flu and having to stand for almost three and a half hours (one hour for special guest Sandrine, who almost put me to sleep), it was every cent worth the fifty bucks. His voice was so crisp, so clear with no mumbling, it was virtually like listening to him on a CD. Jason and his band's sense of humour and passion translated into an awe-inspiring performance. I especially liked the mix of Oasis's Wonderwall with his own number, well performed and beautifully mixed. The part where everyone sang to You and I Both out loud was quite a stirring moment actually, maybe because that's actually my favourite track. 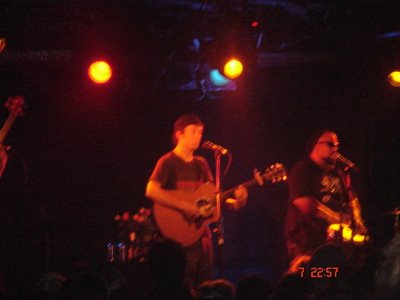 Kudos to Wayne for taking all the pictures as I was too lazy. This is the best picture as amateur like us could capture, be thankful!

Not to forget a very special moment - a fan actually proposed to his girlfriend on the stage, having Jason standing next to him and sang part of a song for him. How COOL??? It was a planned proposal between the band and the man, Paul. Am pretty sure Paul knows someone from the team, but I'm still totally jealous. How cool is that to say 'yes' at your favourite singer's gig? And getting up on stage hugging and kissing and dancing right next to JASON MRAZ? Me and the girl next to me were exchanging notes on how we wish it happens to us, well, not with Paul though...

This is the third proposal that I've seen/heard for the past 30 days. First was on the way to Cairns on Jetstar (how cheesy? Ewww... and it wasn't even international business class). Second was Sharon and Kelvin's. How sweet? Looks like it's now the hitching season, on contrary to what Fern believes - the breaking up season.

The gay bar at Prince of Wales was ultra-cool! I've not been fed with so much eye candy under one roof for such long time. Let me put it this way, in some typical bar you get 1/10 good looking ones. In the better bars you get, hm... maybe 3/10. But this, ppoofff... 8/10! I don't have to be worry of being picked up (or not) while Wayne had found a new hangout place other than the usual ones on Commercial Rd. Looks like Wayne could be my new Stanford!!!

My throat is freaking sore and my bones are aching, darn!

This is kinda hilarious, at least for a dummy like me.