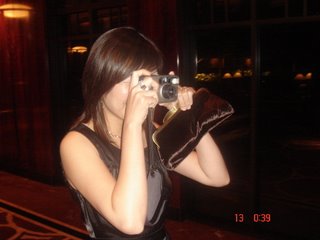 Gary: Are you trying to take underwater picture?
Lena: Did you get it from the museum?
Me: Bring it to war, it could save your life by blocking the bullet.
SP: It's great, you'd definitely find it if you lose it.
Wayne: Good to use it as a weapon when being robbed.

Milyn was proud of her camera, that was given to her by her aunt; we made fun about it, very mean.

Anyways, that's not the point of this entry.

We had so much fun last night, despite the yucky food and bad service at Radii; failing to get in to Eve; and Comme shutting early.

I'd have to say that food at Radii was terribly awful (wonder how they got their Two Hats from The Age Good Food Guide). I literally had goose bumps while eating the beef, eewww... and for the first time in my life, I did not finish my dessert. The taste of everything was just so 'off'. Service was inordinately bad. They screwed up everyone's order and starved us forever before we were served with bread (and some special sour butter). However, the company was good, as always.

Arthur's music wasn't fantastic, but at least they were playing house that I could dance to. Obviously, we were all drinking like there's no tomorrow again. Then... Wayne was eyeing on this guy, but unfortunately he came up to me and we danced, hiaks... Evidently he's straight. Unfortunately, I wasn't interested. He wasn't even cute, Wayne has got weird taste. 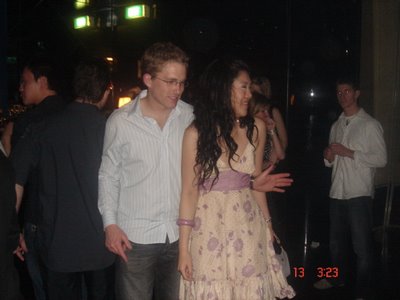 It's Monday again tomorrow, how sad? Had a lazy Sunday today, but a good one. And Wayne and Milyn had made up my day by not being able to tell that I was out bare face today, they thought I looked the same as on any other day. I don't care if it was but I'm just gonna take that as a compliment! Guess alcohol has killed most of our observation skill. Mission of this week for myself - no alcohol except for Wednesday and weekend.
Lotsa Love | Lucky Lazy Lynn at 8:00 pm