You know how you don't get quality sleep or get much sleep after a big night out drinking? That has been happening to me for these couple of months. Some say it is a sign of ageing, bullshit! My theory is, when you're highly intoxicated and crash, you are in fact not really sleeping but merely passing out. So, once the alcohol in your body runs out, you will naturally come out from the state of coma, make sense?

Well, since I got up at 10-ish and was feeling rather grumpy from unable to sleep further, I had decided to wake my bitch up. I've recently developed a love for calling this woman whenever and wherever I feel like, and talk rubbish. Sometimes she's happy to keep me entertained; sometimes she'll yell at me while begging for sleep; and sometimes she doesn't even want to pick up my call, what a bitch?!! As of today, I've learnt a little more about Good Friday, the holiest day of the year and how one shouldn't eat meat. Of course I did as I'm a Buddhist, doesn't quite matter.

Later into the conversation, I was making her to come out for brunch with me but she told me everything was shut. I said we shall go yamcha and I was pretty sure there are restaurants that were open. She then threw me the question "Lynn, how many years have you spent your Easter here in Melbourne?" Well, for some strange reasons, I strongly believed they were opened for yamcha. I called and they did open indeed. Made my reservation, sent her a text saying...

liar, liar, pants on fire! Who said they are shut? Even Jackie's open and I've made a reservation

She gave me a call afterwards and I threw her her question for me. Honestly, for those who don't know us would think that we hate each other with all our heart. The way we speak sometimes, is just unbelievably sarcastic and at times, crude! But I guess this is the unique relationship that we've built between the two of us and I totally love it.

I believe you have a different unique relationship with different individual in your life. You might have two best friends at the same time but you won't have the same kind of relationship with the two of them. It is also not that you favour one more than the others but it is just suppose to be different and unique and we should respect them. Some people just have a hard time understanding this simple theory and get jealous or upset with you when he/she thinks she doesn't get the same treatment from you. Don't you actually want it to be different from the others? At least it's special!

For me, I have developed all dissimilar friendship with all my friends, even among the closest friend from high school in KL, as well as my friends here in Melbourne. That doesn't mean I love one more than the other, but that's just the way I customized the relationship for the unique individual, by nature of course. Some I tell them I love them all the time; some makes me feel like I'm the little sister of theirs; some we often argue over the stupidest issues; some I can't handle when I see them too often; some I have to call them once I've got news flash; some I can't pour my heart out but that doesn't mean we're not close; some that don't quite require verbal elaboration but we are able to know what we want; and some...

You get what I mean?

Anyways, while almost all doors in the city were shut and people were rushing to church, I was thankful that I got my Jackie's dim sum fix. This new addition to the corner of La Trobe and Queen is by far the best yamcha in the city. The dumplings are scrumptiously huge with thin and chewy skin; their chives dumpling is the best I've ever had with the aroma of the chives in between the crunchy meat and prawn filling; the setting of the restaurant is classy but not cheesy; the price was unexpectedly the same, or cheaper I would say, compared to the city's establishments; service was attentive and friendly in comparison to a few of them at Chinatown that usually have to leave the dim sum on your table while the dumplings will literally bounce on their plates; and it's always easy to get a park at that side of the city! Brunch at St Kilda or Port Melbourne and yamcha at good chinese restaurant are the best ever on weekends, besides getting up to Mt Dande for some pies and tea fix. 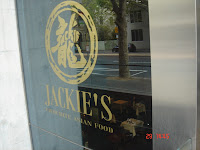 So, on such an uneventful Good Friday afternoon of 2007, I have plunged myself down in front of the tele with the hundredth repeat of SATC while I blog. I was having cup-a-soup before and realized my Tobasco addiction has gotten crazy. I put them in almost everything and anything that I eat or cook at home, although I was trying to cut down as the fact that I have congee with Tobasco could be quite disgusting. Before I know, I might be dipping my chocolates in them, ewwww...
Lotsa Love | Lucky Lazy Lynn at 4:23 pm

You know what, Angela don't pick up phone too, sometimes I wonder if she does it on purpose.. niama.. hahahahhaa

I completely agree with you babe, I treat all my friends differently. Some can reciprocate the witty sarcastic retorts and some find it offensive. Individualism in every aspect always rawks coz we're all differen't right?

Easter weekend was Insane back here,I think I need a few days to recover ;)

And I Love Tobasco too. Have a pretty week babe! xox