I went up for the sun, yet it appears for only less than 10 hours. Being a frequent weather-watcher, I was expecting the precipitation. I literally bustled out of my room after checking-in and got changed in to my tankini (I put on weight) to grab some lunch. I then charged to the beach which is only across the road from where I stayed. My mission of getting a 'subtle' tan was accompany by non-stop clicking of my camera - the sky, the sand, the me, me, me and me; 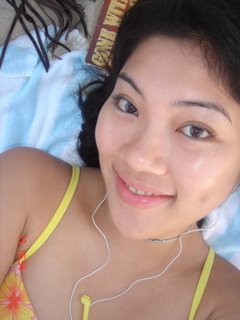 the repeating playlist on my iPod; Margaret Mitchell's Gone with the Wind (Violet's property. She's gonna kill me when she finds out what happened later).

Same goes for the last day of my trip. How ironic can that be when it was drizzling and showering and sometimes pouring almost every day and night except for the day I touched down (arrived in the Sebel at 'bout 2) and the day that I've to go (left the Sebel at 4.30). On the last day, after returning from my Skydiving (yeah, I did it!) to Noosa, I had to gorge down my lunch tapas that was specially made for me (well, they don't usually cater for one. I call this almost-discrimination), before heading to the beach in jeans and singlet (I've checked-out, everything else are in the luggage). Again, random pictures with lotsa me, me and me, that's how and where I met the Canadian hottie (he offered to take a picture for me, sweet). The sun was beautiful, the sea was captivating, such a shame that I've to leave. 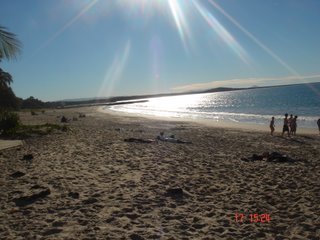 Visited quite a few bars on Hasting Street. This street is basically my 'local' hangout throughout the trip - sleep, eat, drink, club, chill, unwind. I was contented. It was flavour-ful, if you know what I mean

Finally went for the Tandem Skydiving. Was picked-up to the Rambler's office on my second day, waited for an hour plus, all I got was "girl, there's cloud patches in the sky, it's not gonna happen today". On my forth day, Dave woke me up, "hey, we're coming to get you, looks like we can jump today". Hooray!!! Received another call out from my shower "There are patches of clouds again, we shouldn't risk it." Jeezz...

On my last day... rained like cats and dogs in the morning, in my heart - f*ck! In my hands - massive texting to the girls back in Melb, whining. Believe me, good things happen when you least expect. Completely clear sky after the rain. Girl, jump in to the shower, get changed, pack up, go go go!

The experience was amazing. I'm officially hooked. Thinking of taking a course and be a certified skydiver. Sponsors needed, anyone? Took off from the Maroochydore airport to Coolum. Up at 14,000 feet. -5 degree Celsius. Mask on. Face up. Hands crossed. Jump. 60seconds free fall. 5mins parachuting. Looked like an idiot in the DVD, who cares? I do.

Eumundi Market was one of the best market I've ever been. Huge with no nonsense. We're talking about serious arts and crafts and fresh produced food and skincare. And I freaking spent 80 bucks on cab (see, idiot on the run once again). Look, I initially wanted to take the bus after brekkie with Len.

"where are you going after this?"
"Eumundi Market, order your food, I need to catch the bus"
"take the taxi"
"no, I wanna experience the local bus, see the place"
"great, good choice"

I was late, couldn't figure out if the bus was yet to arrive or had left. Can't be bothered, I hailed for the cab. 40 bucks to Eumundi, alright I'm taking the bus back to Noosa.

So I was ecstatic with all those one-of-it-kind finds, I therefore bought: 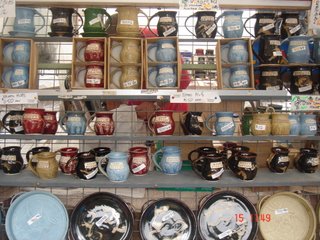 Strolled passed stalls after stalls of specialities fare, why did I have breakfast at Noosa? How silly can I be? Very.

I also saw the One-Man Band, whose music was in fact quite compelling. Hands together for his ability on multi-tasking, look - 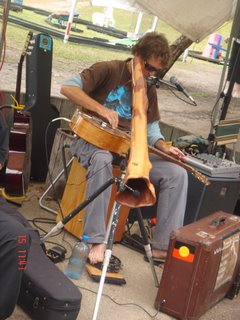 ...and not to forget the prominent flower ladies who sells huge-bright-colourful-oh-so-pretty-roses. Can I have just one? They are so pretty... 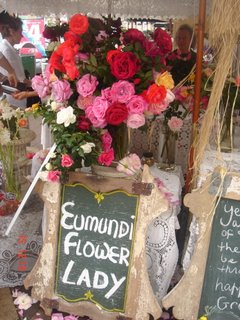 I had to carry all my new-found possessions like a dog while waiting for the taxi that I've called on the street, while it was drizzling. Don't expect me to take the bus with all these shit treasure, I can't be bothered with another 40 bucks either. Frankly speaking, the idea of having a fellow companion with me did cross my mind as a good idea for a good few seconds.

Car ride in Stephen's was revolting, literally. Okay, he took me out with good intention but I've to say his driving sucks. I know I've a problem with motion-sickness but he definitely has a problem with driving steadily. I had however had a better picture of the different towns of Sunshine Coast. The Lame Lynn had to swig the whole pot of hot tea later to settle her stomach, gosh!

As said before, drinks at the bars were pretty impressive. Rolling Rock (most recommended clubs by many I've met) was impressive. Good interior, not-too-bad-at-all music (they were playing House), friendly people (inclusive of friendly clubbers and pathetic picking-ups) and cheap(er) drinks (compared to Melb). Was dancing and drinking the whole night, great fun. Once again, maybe I wasn't expecting anything from a club in such a small peaceful town.

I didn't get to go to the SPA and get my manicure and pedicure, had not enough time (where did my time go?) Well I slept 12 hours on the first night, blissful. I got a good massage, that leave me thinking if I should spare some money every month for some TLC for my body every fortnight. I have a confession to make. I used to have this SPA/massage addiction. The reason why I used used to is solely because I've no choice but to quit as these are luxuries for me in Melbourne, that I can't afford.

I didn't get to do much this trip, on contrary, I've done a lot. I had enough sleep most of the nights. It was a semi-retreat for me from the bustling Melbourne. Of course, Melbourne is the only place that I call home besides KL. I'm glad that I'm home. It's proven once again that I do love the cold. Very much. Can't get enough of it.
Lotsa Love | Lucky Lazy Lynn at 10:20 am

damn... bungy & skydive is sumthing that i MUST do before i die..

You'll get hooked and maybe someday we can both be full-time skydiver, dive around the world, meet new people, how fun is that?