Warning: Explicit Pictures on Display.
Children under the age of 12 may enjoy at your own risk of being caught by parents.
Old farts above the age of 75 with weak hearts please do not scroll down.
*** *** ***
It was Lorraine's second hens night as the first one was a way too 'geeky' one. This time round, organized by the crazy girl, Violet, was held at the ladies club, performance by the Mandate. As oppose to what you see on their website, their strippers are nothing like those in the pictures (magic of Photoshop). They weren't bad-bad but they were a little too old, with hairy butts and small willies (Keat reckons it's the effect of steroids).

Anyways, we had a great time. Lorraine's mum was really cool. Violet had a really bad hangover where she announced that she wasn't going to smoke and drink (Pat and I suspected that the repressed-nun in her is surfacing). I was too sick to drink much, at the beginning *wink*

Sharon attracted some arrogant man who gave us free drinks the whole night at our post-party venue, Boulevard. To be fair, that man was fine-looking until he opens his mouth. I totally despised him, so full of himself, those "me, me, me kinda man" if you get what I mean, totally revolting.

I've not been on this blog ground for just a couple of days but Mrs Pang has been asking about it. It's nice to know that friends actually visit and want updates. I'm fine, I didn't go to Redang, I'm just plain lazy and still not feeling too well. Picture is the lazy of of blogging. So here you go, let the pictures speak the words 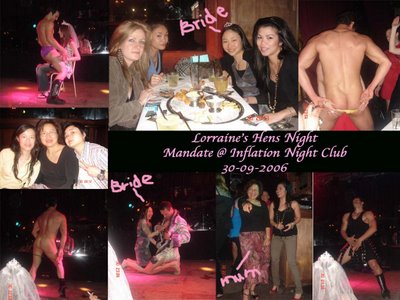 I really appreciate your work which you have shared here. The article you have shared is very informative and the points you have mentioned are very helpful. Thank you for sharing this post. bartender for hens night