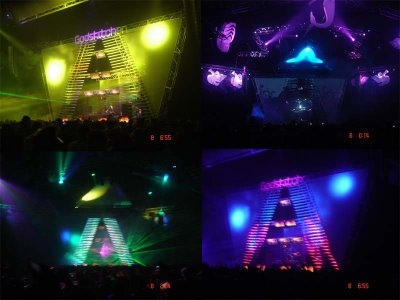 Time takes off so quickly that I'm losing sense of it. I still remember exactly what I wore to the "surprise" Godskitchen 2004 in Sydney and now my Godskitchen 2006 is history for 2 days already.

This year's GK is held at Rod Laver Arena, much bigger than last year's Vodafone Arena (I wasn't there). The venue was so huge, looking for a friend was almost impossible. The only way was to meet them outside the arena at the merchandise booth but trust me, when you're smashed, the journey up the stairs to the outside was such a pain. Not to mention when you return to your group of friends, who are the few among the thousands of people on the dance floor, with eyes that couldn't even recognized your own face, it was almost like finding your earrings in a night market.

I guess 90% of the people I know in Melbourne who club were there, hence, other clubs were almost empty, so they said. Needless to say, the music was certainly great. Cosmic Gate and Above and Beyond was fucking awesome.

I had so much fun. We had so much fun. I'm the one with the ghostly eyes who refuse to wear the sunnies because I thought it was too dark, and I got paranoid. There was another one who went paranoia because her friends were sitting down and asked her to "enjoy herself". There were those who talked non-stop. There was one who threw up and got totally smashed. There were many who were totally smacked and hogged the seats. Also one who stood on the dance floor for about 6 hours straight. And heaps and heaps of others who had their own funny happenings. 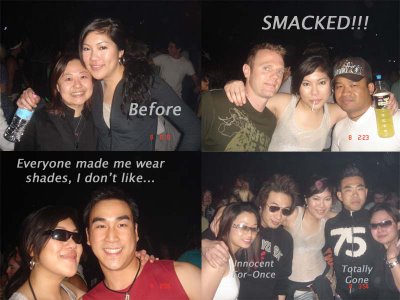 I know I look terrible but heck, I had fun


I've to admit that age is catching up on me, undesirably. Right, I was the one among the group who danced 7 hours straight without sitting at all. But listen, towards the end of the night, erm... beginning of the morning perhaps, my lower back, neck, hips joint and feet were all aching! The three strong ones moved on to the after party while I opted to go home and sleep, pfftt...

Guess what? I saw a rainbow on my way home. It was a pleasant sight. 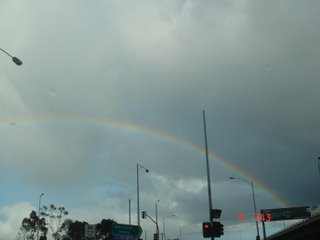 I like rainbow too;)
kekeke... (we missing the main theme on this blog)

Exactly, can someone just say the Godskitchen lightings are beautiful? :p