Live to Eat to Live??

I broke 3 finger nails in 3 days, disastrous. I spilt more than half a tub of my La Mer eye balm, heart breaking. I've got mail from VicRoads today, time flies. I've withdrawn money from the ATM this evening, AGAIN???

These are just small little things, no big-a-deal, girl.

Look, you have no idea how soft my nails are (some people actually blamed it on the lack of greens. I don't buy that), it is not as easy as all of you girls out there to keep it to my expected length. And now it has three broken ones, fine.

For you people who are a cosmetics/skincare junkie like myself, you know how much a mini tub of La Mer eye balm costs, you can get 35 tubes of the pharmacy brands anytime (I'm not trying to prove anything, but just to elaborate on why it breaks my heart).

Yeah, these might just be small little things in everyday's life that even means nothing to some people, however, isn't small little things in life that matters the most? It is, at least to me. Examples - It's not about how you and your darling celebrate V-day every year, but how he loves-you, spoils-you, respects-you, be-there-for-you, shares-his-life-with-you (and the list goes on and on, vice versa of course) on the other 364 days. Am I wrong? Am not seeking agreement for sure, just wondering what's your opinion.

The Fast and the Furious: Tokyo Drift was pretty cool, 'good' isn't the word I can use though. Cool in the sense that the Japs were funky. Not too good as there's not much of a plot. Lucas Black and Nathalie Kelley needs to go for some drama/acting classes for sure (especially Ms Kelley, who's apparently from Sydney, who had only two expressions on screen: seductive sexy smile & worried face). Bumped in to Jevon and Gavin (other than the one I watched with) who happened to be watching the same movie, they hated it.

It reminded me of Initial D, which was much better (maybe I'd been watching it's animation since young?). Driftings and the mountains...

Highlight of the movie: Han, cause he looks so much like Jack C (my friend who I'm sure most of you know about his stories by now). I burst out laughing (loud!) in the cinema during the first two scenes I saw him, man... even the hair was identical. Friends thought I was an idiot laughing at some not-funny-at-all-scenes. By the way, Jack called me two weeks ago, after the unwilling-to-speak-to-me-no-more-14-months!? He asked me out, I was on a date with another guy that night, hm...

Kura wasn't too good tonight. Food was satisfactory like before. Service was semi-satisfactory: very attentive as usual but screwed up all our orders. Friends were grateful that I took them there (I can sometimes be a walking food directory to them; Merv calls me the food-princess). Well, I take that as a compliment (I don't care if it really is)

I'm just a food-enthusiast - I incessantly hunt down places that serves delectable fare (with tolerable services). I'm passionate about food (a very typical Taurean ; Len's cousin, Patrick actually could tell I'm one from our first meeting); I worship good meals; don't balk me on my excessive bills on food and wine, don't ever try; I could give up on shopping for fine food (which I've partially given up); I live to EAT.

Again, am not asking for agreements. Everyone indulge themselves in different things, I'm just a little greedy, I indulge myself in food, and... (let me talk about the otherS at some other time, too many in a night).

Melodon got drunk tonight, she's behind the pillow: 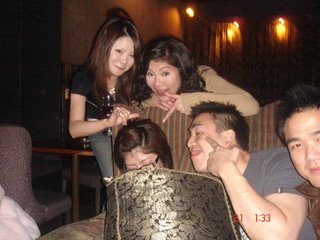 She had only 2 drinks (plus minimal Sake during dinner)

Summary of the evening
I still and will always prefer Shoya over Kura (can't even compare, I even think Shoya is better than Hanabishi(crowned the Best Japanese Restaurant in Melbourne 2005, 2004...).

Sake was good. After-movie wine was fine. Movie was okay.

I charged in to Hot Chocolate to buy my hot dark chocolate before movie albeit my ambitious plan of quitting chocolate (God wasn't on my side this time, they don't do take-away anymore at Melb Central).

I have ugly nails now.

Lastly, I proudly announce that lucky-Lynn got 14 hours sleep last evening, from 7pm - 9am. Got up only because my wicked stomach made so much noise in competition with the constructions site across the road. Funny how my butt cheeks were aching when I got up (putting on too much weight - causing pressure on them - aches? yeah, does make sense)

[munching on Arnott's Choc Chips Cookies while exercising my long fingers with ugly nails] -- constantly on the seek of chocolate fix, that's me, the Lucky one
Lotsa Love | Lucky Lazy Lynn at 9:15 pm