SOCCEROOS MADE IT! 26th Tuesday against Italy. They are incredible. I trust the Australia-Croatia match was one of the most hilarious, and of course bizarre (as was repeatedly remarked by the commentator) so far. The amount of reds and yellows; the two balls in the field; it was just funny yet an intense one. Cahill is still cute, Bresciano is hot as usual. My heart was pumping so fast that cool down time is essential before I could set off to lala land.

History was just being created, by the Socceroos!

I'm in trouble. I've not enough space to store my clothes. Hard to solve. Give some away? Not as easy to pick as the previous. 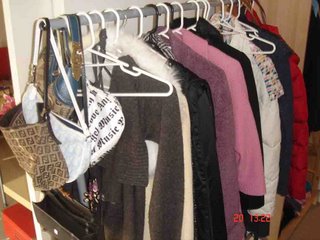 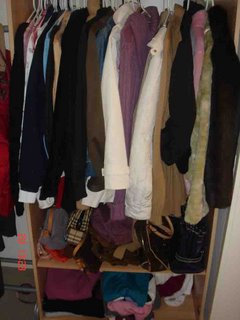 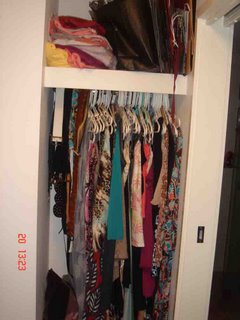 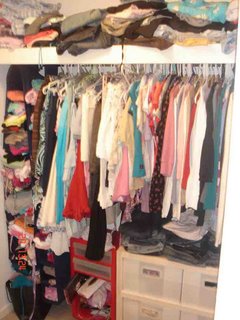 Well, it's not that I have a lot but there's just not enough space. You think it's bad? Not yet... 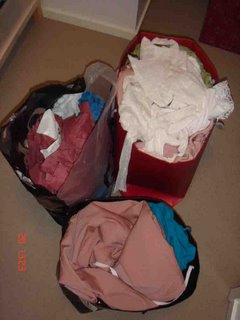 These are the ones that haven't have time to wash and hang them, today's are not included (there's no space to hang them up I'm reminding you)

I'm in trouble. I'm an off-focus shopper. I didn't get to step in to any shoe stores today. I ended up at Nicola Finetti warehouse sales which I didn't get anything (proudly said). And I made a quick rush in to Kookai though I've promised Pat over the phone that I was to get my car right then and meet her in the city in twenty.

My ten-minutes stop over's outcome was a dress, three tops and a capulet. Well done, I'm in for the semi-finals of "Quick Shopper of Victoria 2006". The contestant then face the next challenge: be in the city in next to no time at rush hour. What a stressful day, much expected (I live a stressful life) and well handled (practice makes perfect).

It's gonna be a heavy weekend for me. Lau's down with his "chick". Lau = lotsa parties = excessive booze = tired liver.

Swan Lake on Ice before getting intoxicated. What to wear? I've nothing to wear... I'm in trouble, sigh...
Lotsa Love | Lucky Lazy Lynn at 1:11 am