another week to winter, woot!

I've just finished changing my sheets and swapped the summer doona with the winter doona. It has been kept under my bed for the past three winters, I should've used them and used less of the electric blanket. Temperature is dropping and my winter jackets are ready to come out and play during this highly-anticipated winter. I've been unbelievably good since I came back. Besides getting some dresses from Alice's Zhouk, I've not shopped at all. There are times when I told myself that I need clothes for the coming season but the sanity in me told me to have a look at my wardrobe and those two huge-arse suitcase full of clothes that I want to get rid of. I don't need more so I'm not spending any unnecessary money but why am I still so broke? I've done almost everything I can to minimalize my expenses - eat in, eat at cheap places, eat at friends' places, drink less, party less, go out less, no shopping, use less of the dryer... aarrrggghhh! It's just too painful!

I've learnt something 'old' last night: downloading songs from Limewire. Was watching how Pat did it at her place on Saturday night and have decided that it ain't that hard so I installed Limewire on my lappy. I've downloaded a couple of songs and I'm very impressed with the speed and how user-friendly it is.

I've also recently picked up Bikram yoga again, after not practising for a year. I need it to prepare myself for the snow and to shed some unhealthy pounds. I've put on so much weight I couldn't fit in to my old pants. Okay, those pants were from 5/6 years ago but it's unacceptable to not fit in them. I'm determined to get them zipped again by mid Winter if not sooner. I love practising yoga, I feel rejuvenated, calmer and in general, it just makes me feel good. This time I've more friends who are into Bikram yoga, I hope we'll keep going and not like before where I practised diligently for a couple of months and stopped.

Now that I'm doing the 'real' exercise, I wonder if Candyman should still get me the Wii Fit. 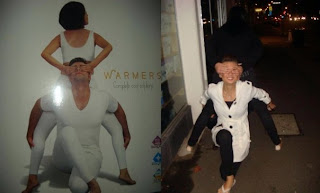 Talking about yoga reminds me of this hilarious photo that Becks and I took on the street outside an Indian mart. Oh dear, where else can I find another girl who would do things as retarded as I would do?
Lotsa Love | Lucky Lazy Lynn at 9:58 pm