First of all, I have to thanks all my friends on Friday for all the efforts in getting me smashed, then took care of me. To all of you out there who had bought Lynn a drink or two, big thank you. To DJ Coming, thanks for taking me home although I still don't have the faintest idea to how I ended up hitching a ride from you. Thanks to the absinthes.

I was broke hence I told myself that I won't be going out after a few drinks before and after dinner. Look, Leesa was in town and we needed to catch up. After my last drinks with her and Milyn, I talked myself into going to Seven with Jev and the Twins for an hour. For crying out loud, Lynn, what made you believed that you'll only made a 60-minute appearance?

As naive as I could be, I did think I was only going to make a short stint at the club and returned to my home sweet home. I even had some notes put aside for me to take the cab. I got there, didn't like the music, didn't like the crowd but was delighted to see one too many familiar faces. Drinks after drinks, vodkas after absinthes, whiskies after I-can't-remember-what-shit. The next thing I knew was bumping in to DJ Coming, then fast forwarded to hopping in to his car, fast forwarded again to getting off the car.

Woke up with too many questions about the night before. Strange messages were sitting in my phone. I somehow figured out that I had given out my number to some people that I don't remember now (Jo has picture to prove, hhmmpph...). I realized I've lost an hour's memory, plus a camera with 100+ pictures within that few hours in the club. I have a group of super-camwhore friends, my god! Thanks to digital development that resulted in irresponsible clicking. Anyone with cramped fore finger? Or a tan from the flashes? 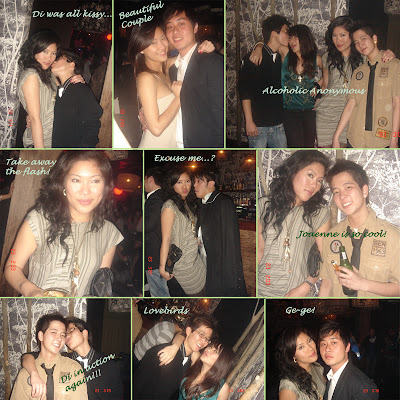 A few of my favourite. Special thanks to Jo
who was taking heaps of candid shots of us.
I love candid shots! Lynn's outfit by Hua!
Lotsa Love | Lucky Lazy Lynn at 5:14 pm

Hahaha babe, looks like we lived the same night but in a diff city! I tend to shudder and block out all unpleasant thoughts, it's mind over matter. But that only works with snippets, when it's complete amnesia, all you can do is play the 'ignorance is bliss' card.

Love the dress and I'll definitely ring you when I'm down in Melb, will be there for around 10 days *beam*