You might for a second thought you've landed in Japan instead of Honolulu when you first get to Waikiki. Booklets were printed in Japanese; retail signage in Japanese; Japanese restaurants everywhere; even the ABC Stores was named ABC for a Japanese reason.

ABC Store is brand of convenient store in Hawaii, you see them at every corner. Everywhere, literally. It's very common for you to see three ABC on the same row of shops. ABC monopolizes the convenient store business, in fact, they are the only one in Hawaii. No 7-11 at all. They sells a wide range of products, I say it is very much like the Watson in Asia. Reason behind the name was it is the easiest for the Japanese to pronounce *shake head*

According to Jessie, she heard that the Japanese has always been treated differently from other tourists. They get all the privileges like a dollar less for tours or coach rides; it was a norm for them to not tip when tipping in the States is non-negotiable; discount vouchers at shopping malls and others that we've not heard of. I've proven it true myself as one day as I was getting off the trolley (their version of our tram) at Ala Moana, this Japanese lady was giving out vouchers to Japanese only but not the Caucasians. She thought I was one of the Jap so I got one too and it was for you to redeem a free mug at one of the retail without even having to spend a single cent. What can I say?

That was all okay but what really annoyed me was the staff at DFS. For f*ck's sake, you're the Duty Free Shop that deals with tourists from all over the world, I would have expected them to speak decent English but hell, no! More than half of their staffs were all Japanese and they no-speak-English, nihon-go dake! Well, hello.

On the other hand, thanks to massive amount of Japanese visitors and residents, I have to give my thumbs up for their Japanese cuisine. Very authentic at most that we've tried. Of course, they are not 100% like what I've tasted in Japan but they are pretty good, a lot of them are better than Melbourne's. We were pampered with the varieties of ramen from many of the restaurants that specialize in ramen in Honolulu, that is something Melbourne doesn't have enough. 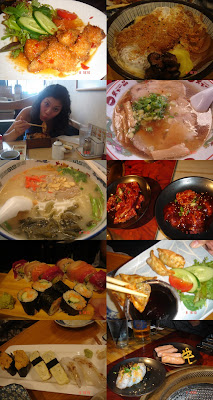 Big Island and Maui have much less Japanese in comparison to Honolulu. I would say Honolulu is the larger version of Gold Coast and Cairns but with way better Japanese fare. The Japs just love their beaches, don't they?

Sansei is the best I've eaten on the entire trip and it is worth a mention. They call themselves a seafood restaurant and sushi bar but they basically serve modern Japanese with a wicked twist. Every single dish that we ordered was fabulous except for the pasta that we ordered at the end, probably because I was already stuffed. 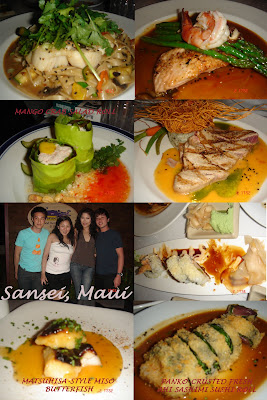 have u found ur diary yet?
see you don't need to travel to japan to have authentic jap food....I'm hungry now and the weather is not helping at all. arrghh hope it will not rain in the morning when i go to work.

We can go for Japanese dinner on our special outing day!