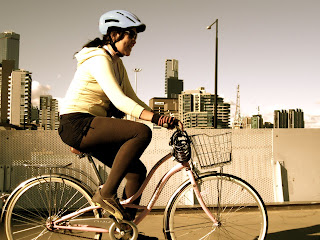 I've been wanting a bicycle since August last year, those really retro kinda bike, preferably in red or pink. I had been talking, talking and talking about it but didn't get my act together to actually get myself one.

This year's birthday, TY gave me Pinko. A pink, retro, gearless, only-one-in-Melbourne (Australia I dare to say), very girlie with a basket bicycle. Oh my god, I'm so grateful! Pinko and I went out to play after June and Des helped me to buy a lock; lights; and a baby blue, retro, racer-looking with front and rear lights helmet. By the way, my accessories cost as much as my bike, wtf?!

June and Des guided us around Docklands today. The last time I rode a bicycle was more than 15 years ago. I was a little shaky at the beginning but I slowly gained my confidence after a while. It's been so long and the feeling of riding a bike is still the same - f*cking great!

There was a bit of drama before we cruised - TY attempted to kill me with Pinko. To begin with, she didn't tighten the front handle enough so the front wheel was totally out of control, swirling right, left and every where. I took it to the shop to tighten it and got it aligned, no big deal. Then the boys told me that my tyres are flat, so Des pumped air for me. Within the first three minutes of riding, my seat plummeted to its lowest, OMG, I got a shock and screamed for help. The seats weren't locked! At the end, every thing was fixed and I'm saved from death.

I have to agree with June that cycling is addictive. I love it so much I'm gonna do it again tomorrow. I'm still a little scared of sharing roads with cars though, hopefully I'll get better soon so I can travel to more places with Pinko.
Lotsa Love | Lucky Lazy Lynn at 1:58 am

It was good fun lynn.

I love your bike! It's so damn nice!