I wanna say Thank You to these good friends of mine who got me my very comfortable ski boots...
Alice, Big B & Small A, Kiwi, Babyface, Kum Den, Evonne, Jevon, Joanne of the Twins, John, Pat, Sugar Sugar and Lao-sai.

Also lotsa thanks and kisses to Candyman who recently gotten me the new skis, they are absolutely divine... 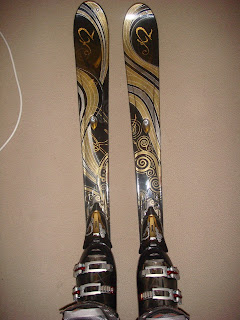 I spent the weekend in Buller testing my new gear and they are good stuff. This was my first time skiing in Buller but according to my friends, the snow was pretty good for mid July. I thought it was okay but the first two days were so foggy that I couldn't see anything. Visibility was so low I didn't know where I was skiing towards, I couldn't tell the speed that I was going at and whether I was moving or halted. It took me two days to get used to my new skis especially not skiing for almost a year. My legs were so weak from lack of exercise, I could hardly ski parallel. Because of its length, it takes a lot more effort for me to make sharp turns too. Bikram yoga is all I need in these two weeks before my next trip.

I love the snow despite it makes me ridiculously broke. I've bought my ticket to Japan. Snow, food, sake and shopping, I'm coming!!! 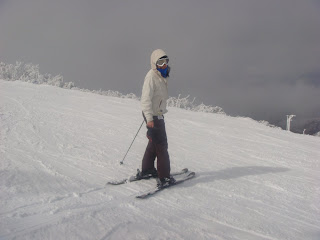