Here I am, sitting at the hotel's cafe by myself, stuffing my face with these figure-threatening cakes and coffee. If this is the life of a tai-tai, then that is not for me. I do have work in hand that I'm committed to, I'm just so skilled in procrastination. I've only been here for a good 7 days and I've put on at least half a size (I can't even suck in my stomach), I cannot imagine that this is what I'll be doing for the rest of my life. Based on what I've been doing, I shall turn into a big fat b1tch with jealous-worthy smooth skin.

So let me tell you what I'm up to in Jakarta. Candyman is here for work and he took me along. While he's working his arse off for about 15 hours a day on an average, yours truly, on the other hand, has been living the decadent life of... of a the girlfriend who's on holiday. Brunch delivered to the room has become a daily thing for the week days. I'll swim every other day but a little disappointed with it being the rainy season, thus, I can't get a nice tan that I imagined I would get. Going to the spa is also an everyday thing, either spa treatment or the traditional Indon massage that my man and I sooooo love, we've been getting that three days in a row now. My daily schedule also includes wandering at the over-the-top mad-arse malls here that have most international designer's brands but I can't afford.

On the first day that I succumbed to the sweet temptation at The Cafe and exposed myself to the ultimate risk of unable to fit into my skinny jeans, I met Annisa - a local girl who waitresses here. She was very friendly, so friendly that she made me feel the instant warmth after wandering alone in town by myself for half a day, in a city so strange to me with no footpath and people knocking on your window in the middle of freeways begging for money. The following day, I was on the verge of blowing up after my two dinners at Plaza Indonesia, I returned to the hotel and headed straight to The Cafe anticipating to see my new friend. I had cakes and tea and chatted with her about what I've bought from the mall and how I would like to get some cheap stuff, like those from Chatuchak, Bangkok. She offered to take me there the following day before her shift.

ITC in Mangga Dua was the place we went with at least 2000 stalls under one roof, selling knockoff hangbags, shoes, clothes for both men and women of all age, as well as toys, electrical goods and food. I reckon they are as cheap as Bangkok if not cheaper and most of them are of better quality. I got baby-Ts for AUD2 and smock dresses for AUD25 top. The most exciting thing was Annisa took me to get Soto-bihun for lunch and had my most favourite bottled ice-tea in the world, Teh Botol. I was so grateful for this babe to get up early after her night shift to take me shopping. This mall is such a local hangout, I was the only foreigner that day and most of them can't speak English. My limited bahasa has saved me a lot of money and I've learnt to pick up the Indon accent by rolling my tongue at r's!

Anyway, back to my lonely life here. Well, it's not that bad. Candyman's colleagues and even bosses are very nice to me but hey, they are here to work. So I've been hanging out by myself in the day and turned down dinner invitations at most evenings as I am the only girl on this trip and it's not normal for them to take girlfriends along on business trip although everyone knows about me. I just don't wanna make them feel uncomfortable with a bimbo around. I did join them for drinks on the first night when they didn't just talk about work. Also had dinner with a big group of them on Friday and went for jazz, drinking and clubbing on the same night. It was good fun and they are really nice people, but in the day... I'm just so lonelyyyyy! Pfftt... I'm such a whinger.

Candyman has been the sweetest boyfriend to me by putting work aside and spent the weekend with me, although that also means he had to stay up till 1am to finish up his work last night. He accompanied me to some very local Padang restaurant for lunch, to ITC again because I wanted to shop more but the crowd had given him a massive headache, to malls that I've not been, non-stop eating and of course, our daily massage fix. The weekend has made up our lost time during the week, smiley is me.

We were supposed to be back in Singapore on Saturday but work needs him here and I chose to stay with him. So what have I seen in Jakarta? Very luxurious mall especially the brand new Pacific Place that has yacht in the middle of the mall with real water; I got lost in the labyrinth of stalls at ITC; kids would harass you on the streets for money, as well as on the freeways; it's not safe to walk on the street because it's very common that people get attacked here; the cakes at The Cafe is so sinfully delicious I deserved to be sent to hell; Indonesian traditional massage is wayyyy better than the Thai's; and my skin is ultra smooth after the spa treatment that I had.

Alright, my man is making noise that I'm spending time online instead of cuddling up with him in bed. Should have an early night and seriously resume on my work tomorrow before I get screamed at. No pictures from Jakarta yet as they're all still sitting in the camera. 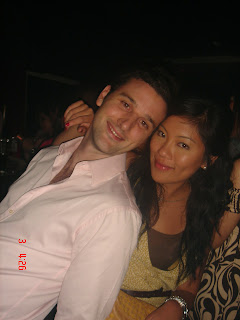 hugs and kisses from the both of us!
Lotsa Love | Lucky Lazy Lynn at 8:29 pm

p.s. Will you be coming back here?
I have a need to show everyone my new baby!

OMG, what a life!!! I need to find a man that travels for work as well. kekeke...feel so good to be wanted ya? :p

Mrs P, I won't be going back to jump in to your new baby but I don't mind testing it for you at the end of the year, or if I make enough $$$, middle of the year.

Li Kai, good good good, life is darn good now and I know I'll miss it when work and studies take up all my time from next week onwards.