So what did we do in Bintan?

We climbed the rocks. We had 2 dinners in 3 hours' time. We slept a lot. We played with each other.

Bintan is nothing when you've just been to paradise. The beach was so-so but I would not swim in there at all, no way. So Candyman took me to the other end of the beach where there were rocks and we climbed to my so-called middle of the sea. I had probably scared a huge lizard in glamourous green to death by screaming so loud when we met. 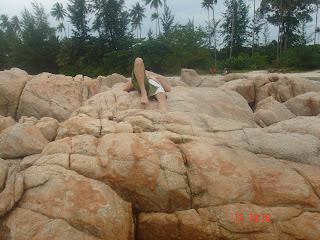 This place is a rip off as everything was over-priced in SGD. Some people were raving about how great their massage was but let me tell you, it was pretty ordinary and they charged us SGD30 per hour for only a back massage, pfffttt! The place that I went to below his place charges SGD45 for an hour for full body, and there are heaps of cheaper places down the road, I just wanted a nearer one that is a little more fancy than the others, and they really give good traditional chinese massage.

Dinner at the resort was shit and we almost walked out of the Thai restaurant without paying because service was so bad, everyone in the restaurant were stuffed from impatience and frustration. So we took a shuttle to their Indonesian restaurant for our second dinner of the night. Oh, we stayed at Nirwana Resort Hotel, one of the four different accommodations they provide in their huge guarded area. You're basically caged in this holiday resort where you can choose to stay in their resort hotels, chalets or villas, where they have about 10 different restaurants and bars and various other service like SPA, and they take your around in their free shuttle. Aaarrggghhh... I felt so trapped in this so called heaven that didn't give me anything heavenly except for my man.

I couldn't help but asked every Singaporean that I met after my return what is so great about Bintan. These are the answer I've gotten...
1) It's less than an hour's boat ride from Singapore
2) HEARD that they've nice beach
3) HEARD that they've good cheap massage
4) Everyone goes there

I can tell you, all the above are not true except for point #1.

I had a good time with Candyman regardless, it's always good to have him around. He arranged and booked for this romantic weekend getaway and I really appreciate it. We know it is always good when we're together. 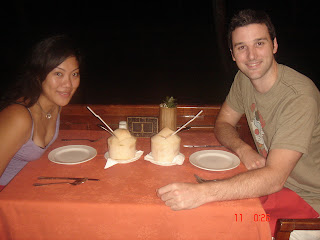