what's left in you without service?

In life, it is extremely hard to totally avoid making mistakes. I believe, however, it is not what wrong you’ve done, but it is how you handle your mistakes, in this case, other people’s mistakes.

Last week, Mimi and I explored the eateries at Commercial Road in Prahran, namely Mandala and Gaijin. It was either they were really unprofessional, or luck wasn’t with us on both nights.

First, it was Mandala. There was a hair in our curry. It was thick, short and curly. You know what we associate that kinda hair with, don’t ya? Gross! So we called for the waitress, told her about it, she sent her supervisor, she said she’ll make us another one. We said it’s okay, we don’t feel like eating anymore. Everything was fine. Then I took a photo of that hair sticking out of the meat. The tanned-skin-size 18-manager, gave me a dirty look from across the counter. Then they came over to take away our plates in the rudest possible way you could imagine, with faces black like squid ink. Duh!!! If you served food with hair in food to your customer, you expect your customer to snap a photo of it as souvenir. After all, we couldn’t eat the food, getting a photo as souvenir wasn’t too much to ask for, was it?!

The following night, we ventured to Gaijin on the same stretch for their all-you-can-eat sushi/sashimi dinner. Whether the food was good or was it value for money aside, they tried to kill me. In one of their rolls, there was a super sharp plastic sticking out from it. Oh yes, it was in their soft shell crab maki. So I examined it with my finger, making sure that it’s something hazardous. I called for the waitress, and I told her what happened. She glanced over to the maki and told me that was soft shell crab. This time, I gave her my dirtiest look and shafted the plate to her face and ask her to touch it. She then took away the rolls, without a word of sorry, without any explanation and off she just went! What the hell, seriously? Couldn’t you just apologize? 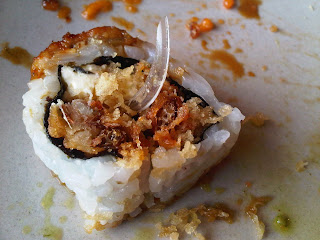 If I ate this, I would've been taken to the hospital, seriously!!!
Unbelievable! I cannot believe these people. You’re in the service industry, service is all you could offer. All I asked for was a simple apology. Honestly, if it was me, I would’ve made something up like “we’re very sorry, we’ve got some new staff in the kitchen, they must’ve made a mistake”. If you’re not smart enough to come up with an excuse, just keep apologizing, for God’s sake!

My take on Mandala and Gaijin is that they are dirty and the staff are either rude or dumb, or both! It’s not important anymore whether the food was yummy because I’m definitely not stepping foot in there again. And you know what? I had diarrhoea after Mandala and Mimi had the same thing after Gaijin, coincident much?
Lotsa Love | Lucky Lazy Lynn at 5:26 pm

Labels | I Kissed 'n I Tell